For decades, we’ve been hearing about U.S. dependence on foreign oil. Whether it’s our dependence on “people who don’t like us,” a problem with sending money overseas, or the fact that our economy is dependent on an energy resource we don’t control, you couldn’t get away from the beating drum over foreign oil. Recently, the narrative has taken some interesting turns, and now it may be another country that’s troublingly dependent on foreign oil.

China overtakes the U.S … again
You may not have noticed, but over the past eight years our dependence on foreign oil has declined rapidly. In 2005, we imported 60.3% of the oil we used. By 2009 that number was down to 51.5%, and in January of this year we imported just 37.3% of the oil we consumed. That’s astounding in and of itself, but it’s even crazier when you consider that the second largest economy in the world, China, has been quickly moving in the opposite direction. It has now taken over the role of the biggest oil importer, a title we’d held since the mid-’70s.

In December, for the first time, China imported more oil than the United States. The country, built on exports, imported 6.12 million barrels per day, or 60% of consumption, to 5.98 million in the U.S. — a shocking turn of the tables. You can see that the general trend for U.S. imports has been declining since 2005 while China’s production and consumption gap has been widening: 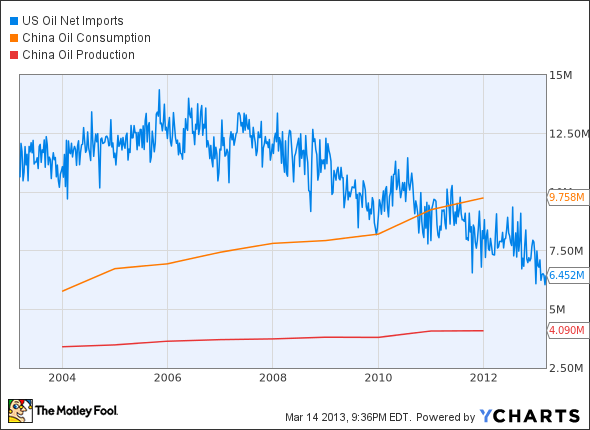 Political implications
Depending on oil from places like the Middle East, where we have so many political problems, has been a challenge for decades. But with imports falling and abundant supplies from our biggest supplier, Canada, the U.S. is well on its way to eliminating dependence on anyone outside North America for oil. China is in a different position.

In 2011, Saudi Arabia (20%), Iran (11%), Russia (8%), and Venezuela (5%) were four of the country’s largest oil suppliers, and a new pipeline to Russia will expand its flow to China. Each has its own political challenges, and with China becoming dependent on foreign oil, it forces the country into the middle of conflict.

China would love to have less dependence on these countries for oil, but it doesn’t have the same production capacity as the U.S. or the expertise to unlock the oil it does have.