The shale gas revolution in the U.S. has rocked the energy industry like a hurricane, and in its wake there have been a lot of lessons we have learned along the way. With natural gas prices stabilizing and some natural gas producers eking out profits again, it seems as good of a time as ever to reflect on what the boom in natural gas has taught us about the energy space. Let’s look at three lessons that should shape the industry for the next couple years to come.

1. Take a deep breath and pace yourself. We could also call this lesson “Ode to Chesapeake Energy Corporation (NYSE:CHK)“, because it serves as the quintessential example of what not to do. When horizontal drilling and hydraulic fracturing proved to be a viable way to access scores of shale gas, exploration and production companies bought exploration leases from anyone within earshot of a shale play. In doing so, they put themselves in a bit of trouble because they broke three crucial rules:

Don’t outpurchase your production: When an E&P company leases energy rights, they have a certain time window to start producing and need to continue producing or risk losing the lease. With so much new land and not enough capital to drill, several gas companies, including Chesapeake Energy Corporation (NYSE:CHK) and Enerplus Corp (USA) (NYSE:ERF), have walked away from gas leases, taking a loss on the original purchase.

Don’t outproduce your infrastructure: What makes natural gas more difficult than oil is the ability to transport and store gas. Many companies have resorted to to flaring off gas because they have no means of transporting it. The most glaring example is in the Bakken, where the Energy Information Administration reports that more than one-third of all natural gas produced in the region is flared off.

Don’t flood the market: With so much production and so little takeaway capacity, natural gas prices fell through the floor. Last April, the Henry Hub spot price hit a 10-year low, thanks in large part to copious amounts of natural gas that hit the market. Natural gas companies such as Chesapeake Energy Corporation (NYSE:CHK), Ultra Petroleum Corp. (NYSE:UPL), and EXCO Resources Inc (NYSE:XCO) all saw their share prices tumble with gas prices as well. 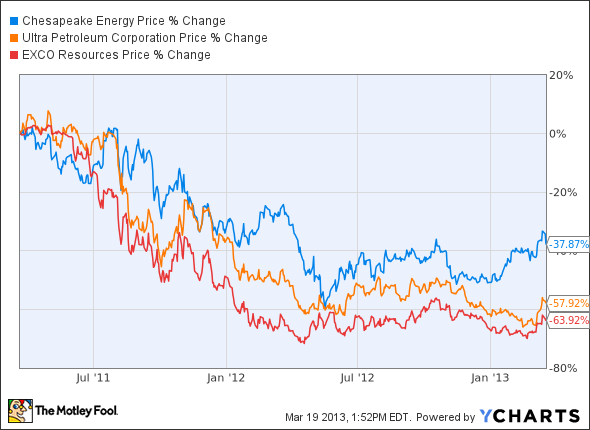 What was so devastating was that companies couldn’t slow down production enough to break the cycle, so it took until rock-bottom last April before production slowed enough to stabilize prices. Now, prices are slowly inching back up. Let’s hope companies will learn some patience when expanding into newer speculative plays.

2. Our pricing mechanism gives the U.S. a leg up. The U.S. has some inherent disadvantages against global competitors. We have a mature consumer market with relatively high manufacturing costs. Surprisingly, though, the emergence of cheap natural gas has emerged as a strong competitive advantage for the United States. Many might point directly to production increases, but what is just as important is America’s method for pricing natural gas. The U.S. is one of the very few countries in the world that dictates natural gas prices based on a spot price. Much of Europe and Asia’s natural gas prices are indexed to oil at a BTU equivalency. So while a standard thousand cubic feet of natural gas in the U.S. trades at a ratio of about 33 to one barrel of Brent crude, many European and Asian nations have gas fixed at a six-to-one barrel-of-oil ratio.