Chesapeake Energy (CHK): Are Shares Poised For a Rebound?

Chesapeake Energy Corporation (NYSE:CHK)’s 2012 fiscal year will likely be one of the company’s worst – if not the worst – on record. In early 2012, the price of natural gas, which is highly correlated with Chesapeake’s financial and share price performances, slid to decade lows under $2.00 per mmBtu. Low natural gas prices combined with CHK’s massive debt load – incurred in pursuit of acquiring undeveloped assets while natural prices were more buoyant – caused a predictable liquidity crunch, forcing CHK to divest valuable assets, write-down previously economical reserves, and abruptly implement a strategy aimed at developing relatively more lucrative oil and liquids assets. Amidst the financial carnage, CEO and former chairman Aubrey McClendon was implicated in a corporate governance scandal and replaced as chairman. Here’s our latest insider trading report for Chesapeake.

Recently, Chesapeake reported dismal third quarter results attributable to costly asset write-downs and delayed asset sales, forcing the company to take out an additional $2 billion unsecured loan and likely causing the company to miss its target for $13 billion in asset divestitures for all of 2012. Nevertheless, natural gas prices have rebounded strongly since April and a number of heavyweight investors, including Carl Icahn, have signaled renewed interest in the company. Shares of CHK could be poised for a long-awaited rebound.

A number of Chesapeake’s major competitors, including Apache Corporation (NYSE:APA), Devon Energy Corporation (NYSE:DVN), EOG Resources, Inc. (NYSE:EOG), Anadarko Petroleum Corporation (NYSE:APC), boast much more oil and liquids assets, which insulated them from negative price movements in the market for natural gas. Chesapeake is only gradually undergoing this transformation and remains heavily dependent on gas for revenue generation. Gross, operating, and net margins fell across the board compared with both the previous quarter and Q3 2011.

More bad news: Despite substantial asset sales, the company still piled on $5 billion in additional debt since Q3 2011, bringing its total debt to over $16 billion. Chesapeake is expected to delay some asset sales previously targeted for completion during 2012 (due to political concerns involving investments from Asian companies in U.S. natural resources), which will likely make the company’s $13 billion assets sales target unrealistic. The company recently finalized a $2 billion unsecured loan that will be used to repay existing debt and bridge any funding gaps. Fitch rated the loan BB-, citing aggressive capital expenditures and low natural gas price realizations as major factors impacting the company’s credit-worthiness.

Chesapeake has invested aggressively in expanding oil and liquids production (~85% of total fiscal 2012 capex) but may be confronted by the need to cut capital spending if asset sales continue to be delayed. Curtailing such investments will delay Chesapeake’s on-going reorientation toward greater oil and liquids production – a necessary step to insulate the company from future fluctuations in the price of natural gas. 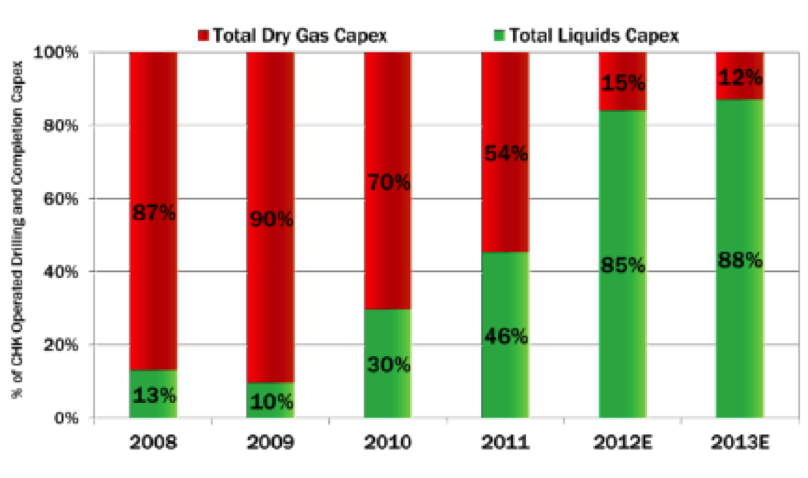 First, the asset write-down that swung Chesapeake from profit to loss in the 3rd quarter was to be expected since the write-down is just a lagging result of the trend line change in natural gas prices. Excluding such one-time events, CHK reported an adjusted net income of $33 million, or about $0.10 per share. Second, if the price of natural gas continues to rise, the write-down may be reversed in the future as reserves that are currently deemed uneconomical to recover once again become economical and open to development. Third, production growth was strong. Total production increased 24% YOY in Q3 2012. Average daily liquids and average daily oil production grew 51% and 96% YOY, respectively, in the same period. As of November 2012, Chesapeake anticipates that more lucrative oil and liquids production will account for 25% of total production and over 55% of revenues in 2013. But by far the most encouraging news for CHK investors is the rebound in natural gas prices from their decade-low nadirs earlier in 2012. 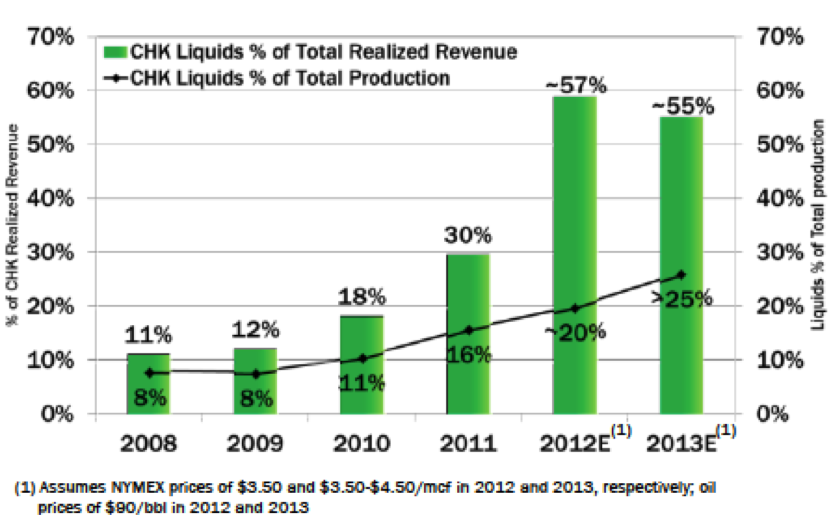 According to a November regulatory filing, Carl Icahn recently increased his stake in Chesapeake Energy to 8.9%. Icahn was instrumental in pulling the company out of the morass of the governance scandal earlier in 2012 and overseeing the implementation of a strategy aimed at shedding debt, trimming operational fat, and developing more liquids and oil assets. Although this strategy is being implemented with admittedly mixed success, a number of high profile investors – including Icanh, Mason Hawkins (see his full 13F portfolio here), and Mohnish Pabrai – are long CHK and earnings estimates for future periods have trended gradually upward in last few months.

For better or worse, and despite its trumpeted diversification strategy, Chesapeake’s fortunes in 2013 will largely be tied to natural gas prices. A rally in natural gas prices above $4 per mmBtu and sustained price strength through the next few quarters would be a panacea for Chesapeake’s current illness. According to the company’s November 2012 investor presentation, a $0.10/mcf (1 mcf = 1 mmBtu) increase in natural gas prices, adds $100 million to 2013 EBITDA. In lieu of such luck, asset sales in support of rebalancing the company’s asset portfolio will continue. According to its November 2012 Short Term Energy Outlook, the IEA predicts that the price of natural gas will average $3.49 in 2013, up from an average of $2.77 in 2012. Current spot prices are above this level and the number of operating natural gas rigs has declined recently. Barring another significant price dip, Chesapeake will almost certainly enjoy improving financial health in 2013.

Chesapeake allowed its eyes to become to big for its stomach while gas prices were buoyant and now the company must pay by enduring a debt hangover and shedding many of the non-core assets that it once stretched to acquire. If gas prices rise far enough, the hangover may be cured. Although many analysts are lukewarm on Chesapeake, company earnings guidance has been drifting upward, natural gas prices are rising, and CHK is maintaining its commitment to rebalancing – all positive signs. This could be very close to the bottom for CHK. Perhaps now is the time to take a page out of Icahn’s book and buy shares in the company.

Besides Netflix (NFLX), What Else Has Carl Icahn Shown Confidence In?