For years, natural gas has been a relatively regional product, and producers that had access to major markets via pipelines were the only game in town. The prospect of liquefied natural gas, or LNG, exports from new places all over the world is turning that logic on its head, and so the former big bosses of natural gas are looking to maintain their prominence through an OPEC-style cartel. Let’s find out why these natural gas giants are nervous and discover what an organization like OPEC could mean for the natural gas industry.

Under pressure
At the most recent meeting of the Gas Exporting Countries Forum, Russian President Vladimir Putin urged members to defend the traditional method of pricing natural gas, through oil-indexed, long-term contracts. According to Putin, this would be done to maintain the energy security of import countries. Even if Putin’s reasoning for this kind of move sounds altruistic, there is certainly a much more self-serving reason to maintain the oil-index price structure: maintaining price control.

Unlike the U.S., many of the other natural gas markets around the world are based on long-term pipeline supply contracts that are on a fixed, oil-indexed price. This model has been thrown on its head because of the boom in U.S. natural gas production. Countries that had built up large LNG export capacity to deliver to the U.S., such as Qatar, found themselves without their largest customer, and were looking to dump this LNG on new markets.

To further compound the problem, the U.S. expects to start LNG exports in 2015 when our first LNG export terminal, Cheniere Energy, Inc. (NYSEAMEX:LNG)‘s Sabine Pass facility, comes on line. It is very possible that all of this LNG trade could undercut oil-indexed prices in markets like Europe and Asia. 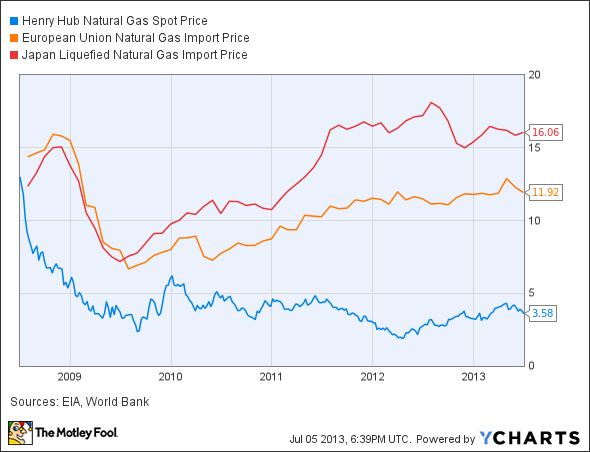 As long as the costs to take natural gas, liquefy it, and transport it remain below import prices for these other regions, there is a great opportunity to capture market share from the oil-indexed contracts from places like Russia. This of course, makes the world’s largest supplier of natural gas very uneasy because so much of the country’s economic health depends on it. Gazprom OAO (ADR) (OTCBB:OGZPY) , the Russian gas giant, is the exclusive exporter of natural gas in Russia and accounts for 10% of Russia’s GDP.

ConocoPhillips (COP) Is a Solid Investment