The fourth quarter was a rough one for most investors, as fears of a rising interest rate environment in the U.S, a trade war with China, and a more or less stagnant Europe, weighed heavily on the minds of investors. Both the S&P 500 and Russell 2000 sank as a result, with the Russell 2000, which is composed of smaller companies, being hit especially hard. This was primarily due to hedge funds, which are big supporters of small-cap stocks, pulling some of their capital out of the volatile markets during this time. Let’s look at how this market volatility affected the sentiment of hedge funds towards Charles River Laboratories International Inc. (NYSE:CRL), and what that likely means for the prospects of the company and its stock.

Charles River Laboratories International Inc. (NYSE:CRL) shares haven’t seen a lot of action during the third quarter. Overall, hedge fund sentiment was unchanged. The stock was in 20 hedge funds’ portfolios at the end of September. The level and the change in hedge fund popularity aren’t the only variables you need to analyze to decipher hedge funds’ perspectives. A stock may witness a boost in popularity but it may still be less popular than similarly priced stocks. That’s why at the end of this article we will examine companies such as Arrow Electronics, Inc. (NYSE:ARW), Transocean Ltd (NYSE:RIG), and Douglas Emmett, Inc. (NYSE:DEI) to gather more data points. 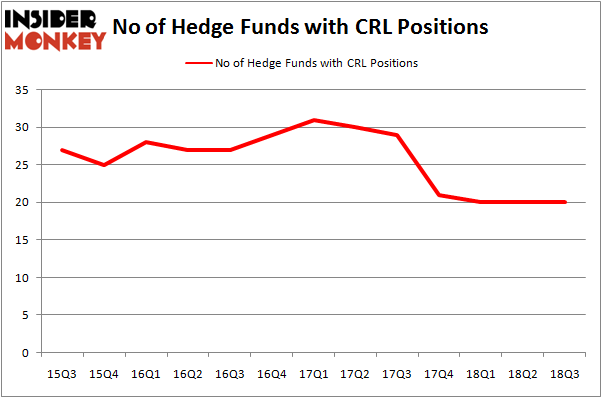 More specifically, Renaissance Technologies was the largest shareholder of Charles River Laboratories International Inc. (NYSE:CRL), with a stake worth $232.1 million reported as of the end of September. Trailing Renaissance Technologies was AQR Capital Management, which amassed a stake valued at $182.4 million. Ariel Investments, Fisher Asset Management, and D E Shaw were also very fond of the stock, giving the stock large weights in their portfolios.

Due to the fact that Charles River Laboratories International Inc. (NYSE:CRL) has experienced falling interest from the smart money, logic holds that there were a few money managers who were dropping their entire stakes last quarter. Intriguingly, Peter Rathjens, Bruce Clarke and John Campbell’s Arrowstreet Capital sold off the biggest stake of all the hedgies tracked by Insider Monkey, totaling close to $11.2 million in stock, and Matthew Hulsizer’s PEAK6 Capital Management was right behind this move, as the fund dropped about $0.5 million worth. These transactions are intriguing to say the least, as total hedge fund interest stayed the same (this is a bearish signal in our experience).

As you can see these stocks had an average of 25.75 hedge funds with bullish positions and the average amount invested in these stocks was $554 million. That figure was $737 million in CRL’s case. Transocean Ltd (NYSE:RIG) is the most popular stock in this table. On the other hand Douglas Emmett, Inc. (NYSE:DEI) is the least popular one with only 14 bullish hedge fund positions. Charles River Laboratories International Inc. (NYSE:CRL) is not the least popular stock in this group but hedge fund interest is still below average. This is a slightly negative signal and we’d rather spend our time researching stocks that hedge funds are piling on. In this regard RIG might be a better candidate to consider a long position.