Changyou.Com Ltd (CYOU): Are Hedge Funds Right About This Stock?

Our extensive research has shown that imitating the smart money can generate significant returns for retail investors, which is why we track more than 700 prominent money managers and analyze their quarterly 13F filings. The stocks that are heavily bought by hedge funds historically outperformed the market, though there is no shortage of high profile failures like hedge funds’ recent losses in Facebook. Let’s take a closer look at what the funds we track think about Changyou.Com Ltd (NASDAQ:CYOU) in this article.

Changyou.Com Ltd has seen a decrease in activity from the world’s largest hedge funds lately. Our calculations also showed that CYOU isn’t among the 30 most popular stocks among hedge funds.

While collecting information for our write-up, we came across Tao Value’s Quarterly Letter, which had an opinion on the stock. The hedge said the company was a negative contributor to its portfolio at that time. We bring you a snippet from that report:

“The largest detractor this quarter is YY Inc. (ticker: YY) with -105 bps. It was followed by Sohu (ticker: SOHU) and Changyou (ticker: CYOU), contributing -104 bps and -101 bps respectively.

SOHU & CYOU are different stories. SOHU suffered another sliding quarter, partially because of this quarter’s tech selloff, it appears even cheaper to its intrinsic value. CEO and Chairman Charles Zhang continued his capital market maneuvers to realize value. On February 1st, 2018, Zhang issued a letter to reiterate his commitment of the non-binding buyout offer however hinted a lowered offer price. On April 2nd, 2018, Sohu announced its plan to liquidate its Delaware entity shares and swap it with its Cayman entity shares, which could be driven by tax consideration. On April 5th, 2018, Changyou announced its plan to distribute a $9.4 per ADS special dividend, effectively financing Sohu (Changyou’s parent and major owner) for buying itself out at the cost of taxes. I was right about its “catalyst-rich” nature. However, if Zhang pursues some short-term value realization event (e.g. taking Sohu private with low-ball offer), the probability for our position to generate return has significantly decreased. This is a classic example of “Even you can predict future events, you cannot predict the perception towards these events.”

How have hedgies been trading Changyou.Com Ltd (NASDAQ:CYOU)? 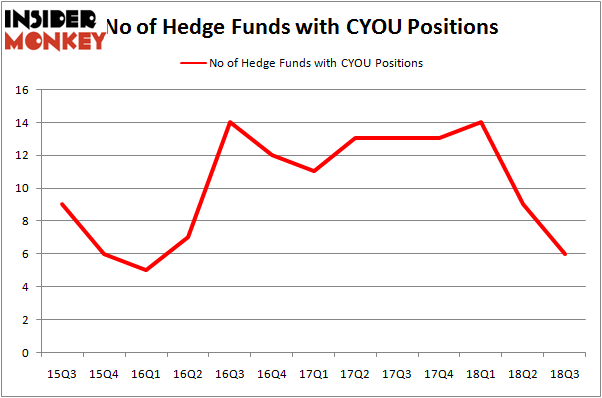 More specifically, GLG Partners was the largest shareholder of Changyou.Com Ltd (NASDAQ:CYOU), with a stake worth $16.9 million reported as of the end of September. Trailing GLG Partners was Renaissance Technologies, which amassed a stake valued at $12.2 million. Two Sigma Advisors, Oasis Management, and D E Shaw were also very fond of the stock, giving the stock large weights in their portfolios.

Judging by the fact that Changyou.Com Ltd (NASDAQ:CYOU) has experienced bearish sentiment from the aggregate hedge fund industry, it’s easy to see that there exists a select few hedgies that slashed their positions entirely heading into Q3. At the top of the heap, Paul Marshall and Ian Wace’s Marshall Wace LLP dumped the largest stake of the 700 funds watched by Insider Monkey, valued at an estimated $0.9 million in stock. David Costen Haley’s fund, HBK Investments, also cut its stock, about $0.3 million worth. These transactions are intriguing to say the least, as aggregate hedge fund interest fell by 3 funds heading into Q3.