The oil market continues to develop, and China has become one of the biggest sources of consumption growth. This is in contrast to the U.S., where consumption of crude oil continues to fall. China’s heavily state-directed economy gives its oil companies an extra level of complexity. China continues to grow, but investors need to be aware of the added risks from the Communist Party. 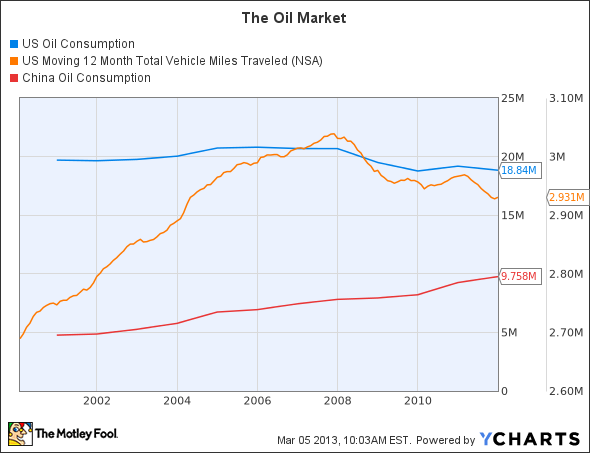 US Oil Consumption data by YCharts

CNOOC Limited (ADR) (NYSE:CEO)
is focused on exploration and production. It has the backing of the central government, but such support can get in the way of growth.

The positive side is that CNOOC Limited (ADR) (NYSE:CEO) benefits from its government connections in its assets around China. The nation needs energy and there is no way to get around this. The government’s aggressive action in the South China Sea is not positive for China’s neighbors, but it does pave the way for CNOOC to play a greater role.

Production continues to pick up in the South China Sea, Iraq, and Alberta. The firm has little debt with a total debt to equity ratio of just 0.19. CNOOC Limited (ADR) (NYSE:CEO) is a major oil company with a net production of 69.6 million barrels of crude oil and liquids in Q3 2012. At its current price to earnings ratio around 7.6, it is cheap and worthy of a second look.

PetroChina Company Limited (ADR) (NYSE:PTR) is larger than CNOOC and a very different firm. It is an integrated oil firm and operates in upstream and downstream segments.

The central government sets the prices of a number of products, including gasoline. This exposes PetroChina Company Limited (ADR) (NYSE:PTR) to losses because the cost of oil can be greater than the revenue generated from oil derived products like gasoline. Other socialist countries like Brazil have government-set gasoline prices. They have found it is a great tool to keep the populace calm and productive, one of Beijing’s main goals.