One of the most successful investors most people have never heard of is named Hetty Green. In an age when women couldn’t even vote, she turned a nice inheritance into one of the country’s largest fortunes. How? She explained in a 1905 interview:

I buy when things are low and no one wants them. I keep them until they go up and people are anxious to buy. That is the general rule of business success.

Today, Hetty might have been interested in fertilizer, or crop-nutrient, stocks. Here’s a take on some of the companies and why they might be a worthwhile investment consideration.

Why no one wanted them

Large Russian producer Uralkali Group sent fertilizer stocks reeling when it pulled out of one of two major selling cartels and threatened to ramp up production. Uralkali warned it could boost its output of potash, a key crop-nutrient used to strengthen plant roots, which might cause prices to fall significantly. Since the two consortiums, one North American-based and the one formerly including Uralkali, are thought to control about 80% of the world’s potash production, the fraying of a stable pricing environment begets worry about potential industry sales and earnings declines.

Even though the immediate market reaction to the Uralkali news was dire, with some fertilizer stocks falling close to 30%, the end result for the industry might not be so bad. For one thing, strong global demand for crop nutrients is expected to continue. Farmers continually need to improve soil fertility and food production thanks to a growing world population. Plus, opportunities to increase arable land are limited. So it is imperative that crop yields increase on the already-producing fields.

There are also questions about the long-term effects of Uralkali’s decision. The company has little to gain from severely distorting world potash pricing. In 2010, it doubled its size in a $7.8 billion acquisition, funded by $1.6 billion in bonds and 1.2 billion newly issued shares. It would seem unlikely that Uralkali would want to inflict long-term financial hurt on itself when it recently added such a burden. A burden that grew heavier with a recent $1.3 billion share repurchase funded by additional debt.

Finally, the uncertainty also seems to hinder any hurtful industry expansion. Global mining power BHP Billiton now has a much tougher decision about whether to go ahead with its long-delayed $14 billion Canadian potash project. Especially after fellow mining giant Vale pulled out of a large project scheduled in Argentina and a planned mine in Great Britain by Sirius Minerals seems to be stumbling.

Some seemingly “on sale” industry participants

CF Industries Holdings, Inc. (NYSE:CF), a global leader in nitrogen and phosphate crop-nutrient products, might be of interest given the recent sell-off. In its latest quarter, the company reported adjusted net earnings of around $507 million, down 10% compared to the prior year. Sales were $1.7 billion, down 2%, primarily due to lower volumes and average prices for phosphates. Nitrogen sales in the quarter totaled $1.5 billion, 89% of all sales, slightly higher than 2012. Phosphate sales were $189 million, a decline of 18%. Combined volumes were flat, but profits were hurt by weak pricing and higher costs.

Even though results weren’t great, the company is optimistically expanding plant capacity in Louisiana and Iowa thanks to the benefits of cheap and stable North American natural gas, which greatly aids CF Industries Holdings, Inc. (NYSE:CF)’s position in the nitrogen market.

The company’s shares may be attractive. Using a cash earnings times a capitalization multiplier valuation, fair business value would be around $250 a share at a 10 times historical multiple. This is based on normalized company sales at around $5.6 billion, cash earnings of approximately $1.6 billion, and a cash profit margin at near 28.2%. 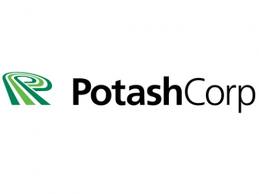 Potash Corp./Saskatchewan (USA) (NYSE:POT): Are Hedge Funds Right About This...