Is Century Communities, Inc (NYSE:CCS) the right pick for your portfolio? Prominent investors are taking an optimistic view. The number of bullish hedge fund bets increased by 1 in recent months. Our calculations also showed that CCS isn’t among the 30 most popular stocks among hedge funds. 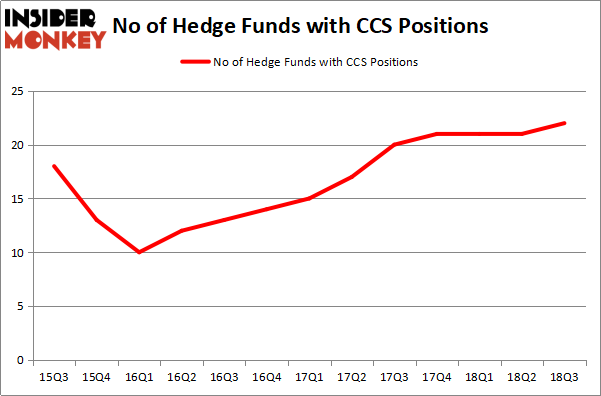 Among these funds, Oaktree Capital Management held the most valuable stake in Century Communities, Inc (NYSE:CCS), which was worth $47.7 million at the end of the third quarter. On the second spot was Millennium Management which amassed $36.4 million worth of shares. Moreover, Long Pond Capital, Basswood Capital, and Sabrepoint Capital were also bullish on Century Communities, Inc (NYSE:CCS), allocating a large percentage of their portfolios to this stock.

As one would reasonably expect, specific money managers were breaking ground themselves. Long Pond Capital, managed by John Khoury, assembled the most valuable position in Century Communities, Inc (NYSE:CCS). Long Pond Capital had $34.6 million invested in the company at the end of the quarter. Richard S. Meisenberg’s ACK Asset Management also made a $4.2 million investment in the stock during the quarter. The other funds with new positions in the stock are Jim Simons’s Renaissance Technologies and David Costen Haley’s HBK Investments.

As you can see these stocks had an average of 4 hedge funds with bullish positions and the average amount invested in these stocks was $19 million. That figure was $217 million in CCS’s case. Ehi Car Services Ltd (NYSE:EHIC) is the most popular stock in this table. On the other hand 0 is the least popular one with only 2 bullish hedge fund positions. Compared to these stocks Century Communities, Inc (NYSE:CCS) is more popular among hedge funds. Considering that hedge funds are fond of this stock in relation to its market cap peers, it may be a good idea to analyze it in detail and potentially include it in your portfolio.