Out of thousands of stocks that are currently traded on the market, it is difficult to determine those that can really generate strong returns. Hedge funds and institutional investors spend millions of dollars on analysts with MBAs and PhDs, who are industry experts and well connected to other industry and media insiders on top of that. Individual investors can piggyback the hedge funds employing these talents and can benefit from their vast resources and knowledge in that way. We analyze quarterly 13F filings of over 700 hedge funds and, by looking at the smart money sentiment that surrounds a stock, we can determine whether it has potential to beat the market over the long-term. Therefore, let’s take a closer look at what smart money thinks about CenterState Bank Corporation (NASDAQ:CSFL).

CenterState Bank Corporation (NASDAQ:CSFL) shares haven’t seen a lot of action during the third quarter. Overall, hedge fund sentiment was unchanged. The stock was in 19 hedge funds’ portfolios at the end of the third quarter of 2018. The level and the change in hedge fund popularity aren’t the only variables you need to analyze to decipher hedge funds’ perspectives. A stock may witness a boost in popularity but it may still be less popular than similarly priced stocks. That’s why at the end of this article we will examine companies such as Cirrus Logic, Inc. (NASDAQ:CRUS), Intrexon Corp (NYSE:XON), and PQ Group Holdings Inc. (NYSE:PQG) to gather more data points.

What does the smart money think about CenterState Bank Corporation (NASDAQ:CSFL)?

At Q3’s end, a total of 19 of the hedge funds tracked by Insider Monkey held long positions in this stock, no change from the second quarter of 2018. On the other hand, there were a total of 13 hedge funds with a bullish position in CSFL at the beginning of this year. With hedge funds’ sentiment swirling, there exists a few noteworthy hedge fund managers who were boosting their stakes significantly (or already accumulated large positions). 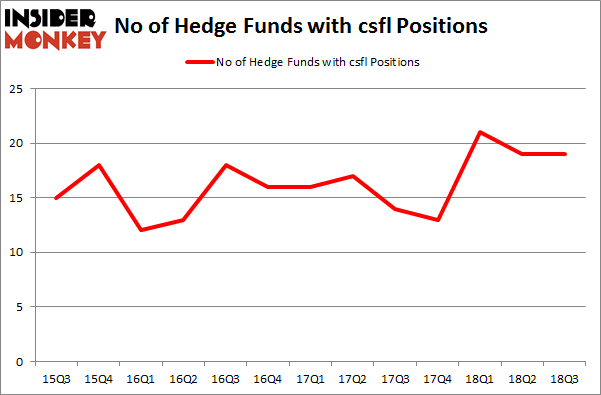 Of the funds tracked by Insider Monkey, Jim Simons’s Renaissance Technologies has the largest position in CenterState Bank Corporation (NASDAQ:CSFL), worth close to $40.8 million, comprising less than 0.1%% of its total 13F portfolio. On Renaissance Technologies’s heels is Forest Hill Capital, managed by Mark Lee, which holds a $19.9 million position; the fund has 4.3% of its 13F portfolio invested in the stock. Some other professional money managers with similar optimism contain Chuck Royce’s Royce & Associates, Israel Englander’s Millennium Management and Michael O’Keefe’s 12th Street Asset Management.

Since CenterState Bank Corporation (NASDAQ:CSFL) has faced a decline in interest from hedge fund managers, we can see that there is a sect of funds that elected to cut their positions entirely last quarter. It’s worth mentioning that John Overdeck and David Siegel’s Two Sigma Advisors dropped the biggest stake of the 700 funds watched by Insider Monkey, valued at an estimated $1.5 million in stock, and Richard Driehaus’s Driehaus Capital was right behind this move, as the fund dumped about $0.7 million worth. These moves are important to note, as total hedge fund interest stayed the same (this is a bearish signal in our experience).

As you can see these stocks had an average of 17.25 hedge funds with bullish positions and the average amount invested in these stocks was $236 million. That figure was $128 million in CSFL’s case. PTC Therapeutics, Inc. (NASDAQ:PTCT) is the most popular stock in this table. On the other hand Intrexon Corp (NASDAQ:XON) is the least popular one with only 9 bullish hedge fund positions. CenterState Bank Corporation (NASDAQ:CSFL) is not the most popular stock in this group but hedge fund interest is still above average. This is a slightly positive signal but we’d rather spend our time researching stocks that hedge funds are piling on. In this regard PTCT might be a better candidate to consider a long position.