Rising biotech stars Celgene Corporation (NASDAQ:CELG), Biogen Idec Inc. (NASDAQ:BIIB), and Gilead Sciences, Inc. (NASDAQ:GILD) have all crushed the market in the last year. Heck, even Amgen, Inc. (NASDAQ:AMGN) has been rewarded by the market for making biologics and biosimilars a top priority. Shares of each company have shot upwards on earnings acceleration expectations thanks to promising late stage pipelines. Multiple potential megablockbusters in the wings could bring in billions in sales by the end of the decade if approved and launched successfully.

Success is not guaranteed, but it seems likely that there are enough drug candidates for each company to exit the current round of development with a winning record. A solid case can be made explaining why each company is the best biotech company. Still, investors should refrain from trying to pick the best one. The group is so close at this early stage that attempting to label one better than the other would be an unproductive exercise and could even leave you with sub-optimal returns. History agrees.

We’ve seen this before
Investors should be wondering if shares are currently priced for perfection. It is a valid concern any time prices increase in a near-vertical manner. Some analysts believe pullbacks are inevitable. Others justify current share prices by looking to future earnings potential; earnings per share are expected to at least double across the board in the next few years. 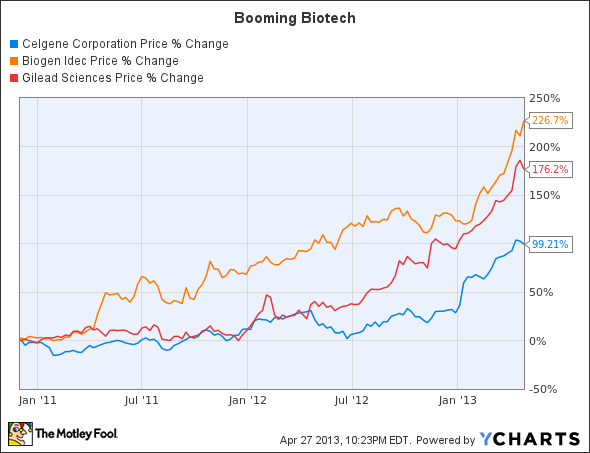 The run-ups above look surprisingly similar to those of big pharma in the mid-1990s in anticipation of major drug approvals. In fact, the pharmaceutical industry has yet to match the record two-year span of 1996 and 1997 that saw 100 drugs gain regulatory approval (a major reason for the patent cliff). 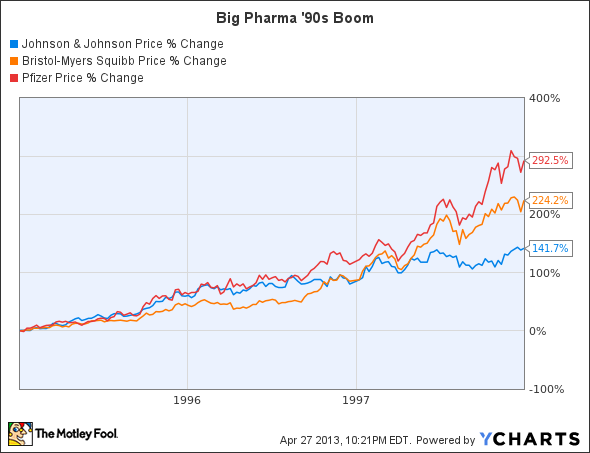 The good news is that the drugs behind the run-up were fueled by legends such as Lipitor, Plavix, Zyprexa, and Levaquin (and a few that never made it). This could serve as justification by those who support the current multiples of high-growth biotech stocks. The bad news is that most big pharma companies have yet to return to the all-time highs set during the mid-90s run-up — with just a few exceptions — even once drugs launched.

Be an investor, not a stock picker
If you’d invested $1,000 in one of the big pharma companies above on January 1, 1996 — at a time when each was considered a solid growth company — your returns would have varied wildly just eight years later on January 1, 2004:

Conversely, if you had invested $333 in each company, you would be left with $3,810 — better than two of the alternatives!

One major reason to diversify pharmaceutical investments is not just to capture success, but to mitigate failure. Regulatory failures, market launch hiccups, slower-than-expected adoption, and market penetration will occur across the dozens of late-stage trials under way. Let’s not forget faulty mergers, acquisitions, and other corporate mistakes. Luckily for investors, Celgene Corporation (NASDAQ:CELG), Biogen, and Gilead have all enjoyed early successes. Just don’t get too comfortable.