CBS Corporation (CBS) Has its Eye on the Future

CBS Corporation (NYSE:CBS)’s growth over the past four years is a classic comeback story. After its stock plunged to $3 per share in 2009, the company has steadily recovered and emerged as a streamlined business. Today, CBS shares trade in the lower to mid $40s, flirting with all-time highs.

The growth of its stock price has outpaced both The Walt Disney Company (NYSE:DIS) and Time Warner Inc. (NYSE:TWX) over the past 12 months, and analysts still see bright days ahead as the company increases its stake in online streaming and advertising. Let’s take a look the key factors driving CBS’ growth.

Shares of CBS rallied nearly 4% after the company posted fourth-quarter earnings on Feb. 15, despite missing analyst expectations on both its top and bottom lines.

For its fourth quarter, CBS earned 64 cents per share. Although this missed the Zacks analyst estimate of 70 cents per share, it represented a 14.3% increase from the 56 cents it earned in the prior year quarter.

A tale of three conglomerates

Time Warner’s business model is split between broadcast television, movies and print media. Disney generates half of its revenue from television networks, a third from theme parks and resorts, and the rest from other businesses such as toys and video games.

CBS, on the other hand, spun off Viacom — which consisted of Paramount Pictures, MTV and BET Networks — in 2005. The modern CBS is smaller and has two main business groups: the Content Group and the Local Group.

The Content Group consists of its entertainment, cable networks and publishing divisions. Revenue for the group edged up 0.9% to $2.64 billion.

Its entertainment division, which consists of its national CBS television network, posted a 0.3% decline in revenue to $1.99 billion from the prior year quarter. Although advertising revenue and network affiliation fees grew, those gains were offset by a decline in television license fees.

The cable networks division, which includes Showtime, CBS Sports and the Smithsonian, posted 10.9% revenue growth to $438 million. The boost was primarily attributed to an increase in popularity of its original series on Showtime, such as Dexter and Californication , which led to increased subscription rates and licensing fees. CBS also owns a 50% stake in the CW Network, which is co-owned by Time Warner.

Its publishing division, which publishes print and digital books, suffered the most, posting a 6.1% decline in revenue to $215 million. Although digital book sales gained 24%, the growth was insufficient to offset lower sales of print books.

The rest of CBS’s revenue comes from its two Local Group segments – Local Broadcasting and Outdoor Americas – which posted 6% revenue growth to $1.13 billion.

Outdoor Americas, which focuses on billboards and display advertising in North and South America, posted a 0.6% decline in revenue to $340 million. A decline in Canadian revenue offset a 3% gain in the United States. The segment formerly consisted of European and Asian operations, which have since been divested. The company recently announced that it would convert this segment into a REIT (real estate investment trust). Both moves reduce CBS’ dependency on the Outdoor segment, which is considered a lagging business.

Let’s compare CBS’ core fundamentals to Time Warner and Disney, to see which is a better value.

CBS doesn’t stand out in any category, making it a fairly comfortable, middle-of-the-road choice between Time Warner and Disney. And that’s not a bad place to be, considering that both companies are currently trading near 52-week highs.

Yet the fundamentals don’t explain why CBS stock has outperformed Time Warner and Disney this past year — until we take a look at top and bottom line growth over the past two years. 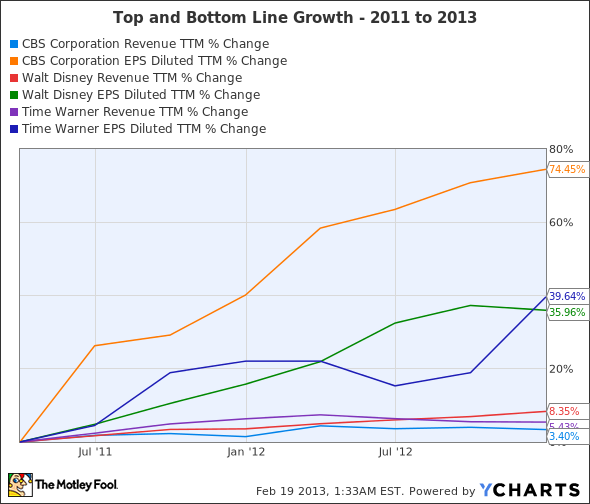 Although CBS’ revenue growth has remained unimpressive, its diluted earnings per share have grown 74.45%. That means its margins are tight and the company is expanding in the right growth segments.