The Dow Jones Industrial Average is up after the Australian Central Bank lowered interest rates in an effort to boost the nation’s economy. Caterpillar Inc. (NYSE:CAT) stock is leading the Dow today, as the interest rate cut bodes well for demand in Australia. As of 1:10 p.m. EDT the Dow is up 68 points to 15,037, while the S&P 500 is up 6.5 points to 1,624.

This morning, the Department of Labor’s job openings and labor turnover report showed that on a seasonally adjusted basis, there were 3.84 million job openings in March, down from 3.9 million in February. As this comes after the month’s jobs report, there isn’t much new information for investors.

The big news today is Australia’s decision to cut its interest rate from 3% to 2.75%. Glenn Stevens, governor of the Reserve Bank of Australia, wrote a statement about the decision: “Growth in Australia was close to trend in 2012 overall, but was a bit below trend in the second half of the year, and this appears to have continued into 2013.”

The bank hopes the cut will boost growth and keep inflation in line with the bank’s target. Australia has been growing strongly on the back of the resource sector, and particularly iron ore that is exported to China. The governor credits previous drops in the interest rate for boosting investment in the resources sector, housing, and consumption.

With commodity prices falling as demand drops in Europe and China, the bank expects investment in the Australian resources sector to peak later this year. Falling commodity prices, combined with a lower-than-expected rise in labor costs, have Australian inflation running slightly below the bank’s target. The bank hopes growing resource exports from previous capacity investments, the growing Australian housing market, and rising consumption will lead to continued sustainable growth. As Governor Stevens wrote, the bank “judged a further decline in the cash rate was appropriate to encourage sustainable growth in the economy, consistent with achieving the inflation target.”

The lower interest rate is good news for the Australian resource sector, which is a major user of Caterpillar Inc. (NYSE:CAT)’s equipment. The country makes up 10% of Caterpillar’s revenue. As such, Caterpillar is today’s Dow leader, up 1.8%. Caterpillar’s stock has far underperformed the market over the past year as the mining industry has slowed down due to falling demand and prices. 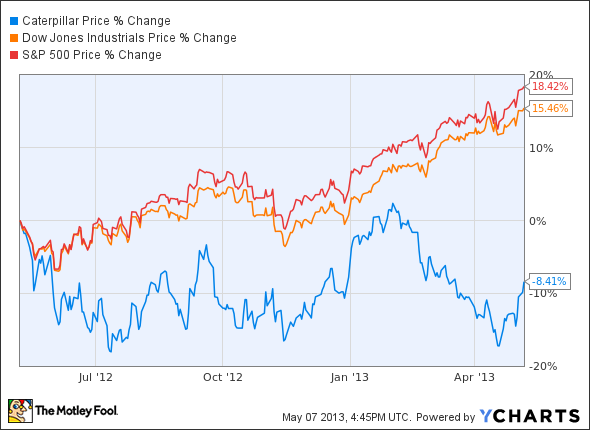 In April, Caterpillar Inc. (NYSE:CAT) missed analyst expectations on both earnings and revenue as demand slowed and inventory built up at dealers. With the miss, the company also announced that it expected to hit the low end of its earnings forecast of $7 to $9 per share for the full year. There was one bright spot, however: Caterpillar announced an accelerated share buyback of $1 billion — the company’s first share repurchase since 2008. While Caterpillar Inc. (NYSE:CAT)’s shares at least temporarily bottomed in April just below $79, there are some investors who think Caterpillar is a buy.

The article Caterpillar Stock Is Beating the Dow originally appeared on Fool.com and is written by Dan Dzombak.