Even during weak macroeconomic conditions, India and China managed to grow to 6%. But both these countries derive a significant share of GDP from their exports. Now that the US economy is showing signs of recovery, exports of goods and services from India and China are expected to normalize. This would not only improve their trade deficit, but also appreciate their respective currencies. Moreover, due to their “policy easing” reforms and interest rate cuts, FIIs (Foreign Institutional Investors) are again pumping money in India and China. It’s a well-known fact that excessive liquidity leads to higher infrastructural activity, which presents a bullish case for companies like Caterpillar Inc. (NYSE:CAT), Deere & Company (NYSE:DE), Joy Global Inc. (NYSE:JOY) and CNH Global NV (ADR) (NYSE:CNH).

But Caterpillar has been having its share of problems. Last month the company booked $580 million ($0.87 a share) as impairment charges due to the allegedly fraudulent accounting principles of Siwei. Caterpillar had acquired Siwei, looking to expand in China rapidly. But in that hurry, its management overlooked crucial issues and carried out the acquisition without due diligence. Fortunately for investors, no serious damage was done and the impairment charges were taken out of its goodwill.

The company reported a massive 55% plunge in Q4 profits but enjoyed a record year overall. Its annual sales rose by 10%, while its profits surged by 15%. Addressing the sudden decline of Q4 profits, its management explained that inventory worth $2.6 billion (company & dealers) had come out in the quarter. The company was looking to reduce its inventory by $1 billion, but there was a reduction of $2 billion worth of inventory. The dealers also joined the spree and unloaded 600 million worth of inventory. This not only affected its sales and revenues, but also its profitability.

But CAT also had its moments. The company received settlement of US tax return to the tune of $300 million, which was unexpected. This partially offset the repairmen charges. Additionally, its acquisition of Bucyrus International in 2011 reported impressive results. Its quarterly sales stood at $1.5 billion, up by 7.4%, while its annual sales stood at $4.7 billion, up by a massive 108%. For FY13, management expects its revenues to be around $68 billion, with an EPS of $7-$9.

On taking a look at some of its key metrics, its balance sheet seems to be improving. 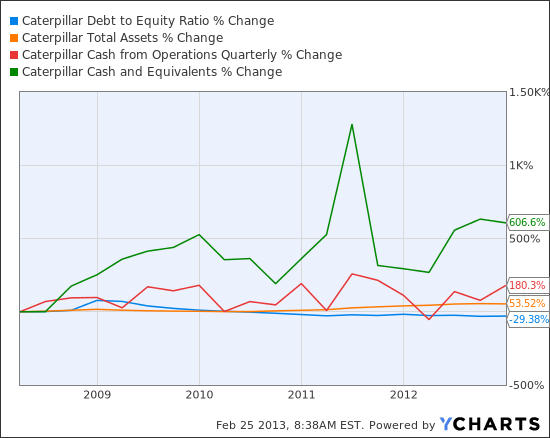 Its quarterly operating cash flows have risen at a staggering rate, and while its cash and cash equivalent have more than doubled over the last 5 years. Although its gross margins have slid by nearly 5%, I think its falling debt/equity and increasing revenues make up for it.