In a previous article I provided a “step-by-step” guide for learning more about selling covered calls.

If you haven’t yet read that piece I’d recommending taking a moment to do so. In either event I’ll provide a quick refresher.  It can be helpful to have this background in mind because a cash-secured put shares many of the same characteristics as the covered call.

Selling a covered call means that you own a security (in increments of 100 shares) and then make an agreement to sell your shares at a certain price in the future. For instance if you owned 100 shares of The Coca-Cola Co (NYSE:KO) at a price of $45, you could sell a January 20th 2017 call option with a strike price of say $50. This means that you’re willing to sell 100 shares of Coca-Cola at a price of $50 anytime between now and the next 10 months.

The benefit of making this agreement is that you receive an upfront premium. You can moderately or significantly increase your cash flow instead of solely relying on dividend income.

The downside is that if the share price rises dramatically, you could spend extra time and effort only to “cap” your eventual gains.

It’s important to be content with either side of the agreement. You want to be happy whether or not the option happens to be exercised. This sounds simple enough, but it takes a bit of thought before you make the agreement.

The same basic notion applies to selling a cash-secured put; you want to be content with either side of the agreement.

The advantages and disadvantages are very similar. With that in mind, let’s work through the basics of a cash-secured put. 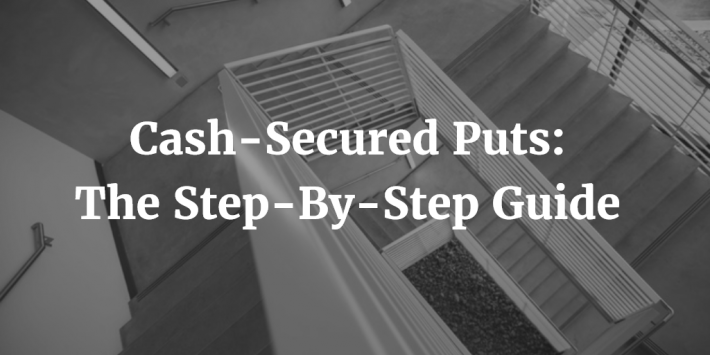 What Is A Cash-Secured Put?

That’s a good place to start. A put option gives the buyer the right, but not the obligation, to sell 100 shares of a company at a given price in the future.

Let’s say that someone holds 100 shares of Coca-Cola and they’re worried that shares may go much lower for whatever reason.

This person could buy a put option with a strike price of say $40. This now gives the buyer the right to sell at $40 per share anytime between now and the expiration date.

If the share price remains above $40, the put option will expire worthless. (Why exercise your right to sell at $40, if you can sell on the market for say $45?) Instead of exercising the option, the buyer would allow the option to expire and instead sell shares in the open market if they wanted to do so. In this scenario the put option is said to be “out of the money”.

Alternatively, if Coca-Cola’s share price goes below $40, the put option is now said to be “in the money”.  In this case, the put option is valuable because it gives the buyer the right to sell at $40 when shares may be trading in the market at say $35.