CarMax Inc (KMX): Are Hedge Funds Right About This Stock?

We at Insider Monkey have gone over 700 13F filings that hedge funds and prominent investors are required to file by the SEC. The 13F filings show the funds’ and investors’ portfolio positions as of September 30th. In this article, we look at what those investors think of CarMax Inc (NYSE:KMX).

Hedge fund interest in CarMax Inc (NYSE:KMX) shares was flat at the end of last quarter. This is usually a negative indicator. Our calculations also showed that BBX isn’t among the 30 most popular stocks among hedge funds. At the end of this article, we will also compare KMX to other stocks including Dover Corporation (NYSE:DOV), Mohawk Industries, Inc. (NYSE:MHK), and ZTO Express (Cayman) Inc. (NYSE:ZTO) to get a better sense of its popularity.

Mar Vista Investment Partners invested in the United States’ largest used-car retailer in the 2017 fourth quarter. In a letter to its shareholders, the fund gave its own perspective on the company. We bring you that portion of the report:

“CarMax is the largest domestic used car retailer with a highly disruptive business model. The company delivers value to consumers through its fully transparent sales process and a nationwide network of 65,000 high quality used vehicles. Since 1993, CarMax has sold over 6.5 million vehicles and appraised another 25 million used cars. The data intelligence collected from these transactions gives CarMax a valuable informational advantage that is difficult to replicate. Over the past twenty years, CarMax’s intrinsic value has compounded by 13% annually. With only 185 stores and 3% of the used vehicle market share, we think CarMax has ample opportunities to expand its store base over our investment horizon.

CarMax’s other main contributor to intrinsic value is its CarMax Auto Finance (CAF) which provides used car financing solely to its prime customers. CAF’s loss adverse underwriting culture is another source of competitive advantage. Moody’s and S&P have validated CAF’s stringent credit standards by assigning AAA ratings to its asset-backed securitizations. CAF’s high-quality nonrecourse loan portfolio lowers its capital requirements to less than 1% of total securitizations. From our vantage point, investors periodically undervalue the financing business due to its capital markets dependency and interest rate sensitivity. We think the benefits of the loss adverse underwriting culture and nonrecourse credit warehouse facilities supersede the earnings volatility.

During the quarter, CarMax’s stock declined 17% after same-store-sales slowed due to a temporary compression between new and used vehicle prices related to hurricane replacement demand. We view this used car price inflation as transitory. Eventually, excess used vehicle supply will force price depreciation to resume. We took advantage of these cyclical issues and purchased the equity at 13x normalized earnings.”

What have hedge funds been doing with CarMax Inc (NYSE:KMX)? 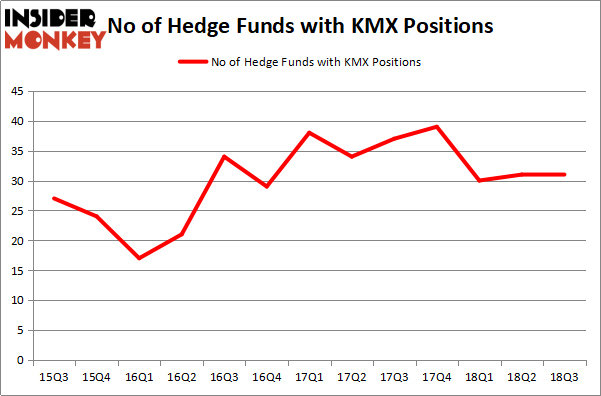 The largest stake in CarMax Inc (NYSE:KMX) was held by Akre Capital Management, which reported holding $392.4 million worth of stock at the end of September. It was followed by Markel Gayner Asset Management with a $366.9 million position. Other investors bullish on the company included SQ Advisors, D E Shaw, and Giverny Capital.

Since CarMax Inc (NYSE:KMX) has experienced a decline in interest from the aggregate hedge fund industry, it’s safe to say that there were a few money managers who sold off their full holdings by the end of the third quarter. Interestingly, Alexander Mitchell’s Scopus Asset Management dumped the largest position of the “upper crust” of funds tracked by Insider Monkey, comprising about $72.9 million in stock, and Alexander Mitchell’s Scopus Asset Management was right behind this move, as the fund dumped about $69.2 million worth. These transactions are important to note, as aggregate hedge fund interest stayed the same (this is a bearish signal in our experience).

As you can see these stocks had an average of 26.5 hedge funds with bullish positions and the average amount invested in these stocks was $1476 million. That figure was $1756 million in KMX’s case. Mohawk Industries, Inc. (NYSE:MHK) is the most popular stock in this table. On the other hand ZTO Express (Cayman) Inc. (NYSE:ZTO) is the least popular one with only 12 bullish hedge fund positions. CarMax Inc (NYSE:KMX) is not the most popular stock in this group but hedge fund interest is still above average. This is a slightly positive signal but we’d rather spend our time researching stocks that hedge funds are piling on. In this regard, MHK might be a better candidate to consider a long position.