The market has been volatile as the Federal Reserve continues its rate hikes to normalize interest rates. Small-cap stocks have been hit hard as a result, as the Russell 2000 ETF (IWM) underperformed the larger S&P 500 ETF (SPY) by about 4 percentage points in October. SEC filings and hedge fund investor letters indicate that the smart money seems to be paring back their overall long exposure and the funds’ movements is one of the reasons why the major indexes have retraced. In this article, we analyze what the smart money thinks of Freeport-McMoRan Inc. (NYSE:FCX) and find out how it could be affected by hedge funds’ moves.

After a sharp jump in hedge fund ownership of Freeport-McMoRan Inc (NYSE:FCX) in Q1, there was a small decline in the second quarter to 42 hedge funds owning $2.28 billion worth of FCX shares. The stock was also extremely popular among funds managed or founded billionaires, as jumping all the way to 2nd place on our list of the 25 Stocks Billionaires Are Piling On. Among them is famed activist investor Carl Icahn of Icahn Capital, whose fund took an 8.5% stake in FCX in 2015 and pressured the company to cut costs and executive compensation. Icahn Capital still owned an $866 million position on June 30, its largest.

In the financial world there are a large number of tools investors have at their disposal to grade stocks. A pair of the most under-the-radar tools are hedge fund and insider trading indicators. We have shown that, historically, those who follow the top picks of the best fund managers can outperform the broader indices by a solid amount. Insider Monkey’s flagship best performing hedge funds strategy has returned 17.4% year to date and outperformed the market by more than 14 percentage points this year. This strategy also outperformed the market by 3 percentage points in the fourth quarter despite the market volatility (see the details here). That’s why we believe hedge fund sentiment is a useful indicator that investors should pay attention to. 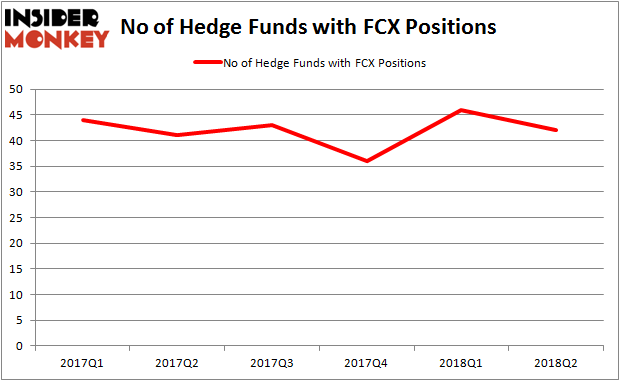 Seeing as Freeport-McMoRan Inc. (NYSE:FCX) has faced declining sentiment from the smart money, we can see that there is a sect of hedge funds that elected to cut their entire stakes in the second quarter. At the top of the heap, David Halpert’s Prince Street Capital Management cut the biggest investment of the 700 funds followed by Insider Monkey, worth an estimated $20.4 million in call options. Christopher A. Winham’s Tide Point Capital was right behind this move, as the fund said goodbye to about $19.3 million worth of shares. These bearish behaviors are important to note, as aggregate hedge fund interest dropped by 4 funds in the second quarter.

As you can see these stocks had an average of 33 hedge funds with bullish positions and the average amount invested in these stocks was $1.91 billion. That figure was $2.28 billion in FCX’s case. M&T Bank Corporation (NYSE:MTB) is the most popular stock in this table. On the other hand Square, Inc. (NYSE:SQ) is the least popular one with only 29 bullish hedge fund positions. Compared to these stocks Freeport-McMoRan Inc. (NYSE:FCX) is more popular among hedge funds. Considering that hedge funds and billionaires are fond of this stock, it may be a good idea to analyze it in detail and potentially include it in your portfolio.