If you love ’80s movies, you know that one of the best parts of those films is the montage. It generally involves watching a down-on-his-luck character train really hard in eccentric ways until he’s ready to win a big karate match or an arm-wrestling tournament. It’s a great plot device, because it can help to condense what should be months of practice into what’s basically a two- to three-minute music video.

Unfortunately, we don’t get montages in real life. If we did, I’m sure that investors in Capstone Turbine Corporation (NASDAQ:CPST) would want one, to watch the slow march toward potential profitability in short order.

Getting over the top
Investors who have followed this company know that it’s been a slow and arduous process to try to get quarterly income into the black. At least the company is consistent: This past quarter, it posted yet again another loss, continuing its streak of losing money every year since its public offering in 2000. Many investors have hung on to the company through thick and thin, thinking that its superior co-generation technology would be enough to bring it to profitability. But it looks as though 2012 marked a time when investors finally started to lose patience, as shares of Capstone suffered an almost 30% haircut in the past year. 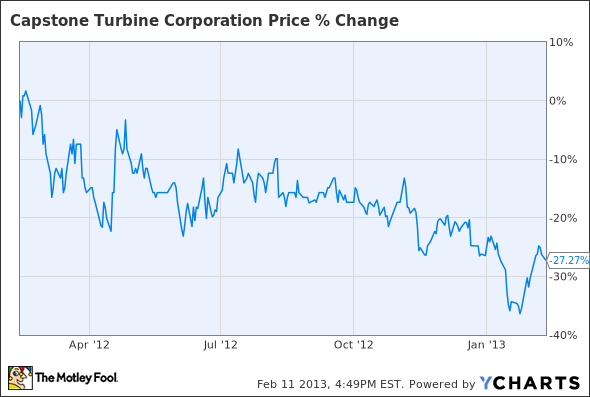 If there’s one encouraging sign to come from this loss, it’s that the company is still heading in the right direction. This quarter saw only a per-share loss of $0.01, another uptick from a $0.03 loss year over year. Capstone also posted its first double-digit gross margin ever this quarter. Thanks to these kind of trends, analysts estimate that Capstone can finally expect to reach profitability in 2015. If the company can continue down this path and reach management’s stated goal of 35% gross margins, then profitability should follow.

You’re the best around
One of the reasons the company has had such a hard time reaching profitability is its industry. As a manufacturer of co-generation turbines, the company is in a space dominated by industrial giants General Electric Company (NYSE:GE), United Technologies Corporation (NYSE:UTX)‘ Pratt & Whitney Division, and Caterpillar Inc. (NYSE:CAT). The offerings for each company feature incredible efficiency ratings — Caterpillar’s co-generation engines rate the highest, with a 96% efficiency rating.

What makes Capstone unique, though, is that it’s able to build a co-generation turbine at a small scale and run on multiple types of fuel, something that none of its competitors can claim. This makes Capstone a much more viable option for smaller-scale power needs, such as commercial and residential markets. What’s keeping the company from breaking through in the market, though, is that most Capstone products sell at a 30% premium to the competition. The company has gone to great efforts with its distributors to emphasize that the lifecycle costs with its products outweigh the premium paid, but in some cases it just hasn’t been enough to justify the sticker price.