Billionaire Bill Ackman and Pershing Square Capital’s latest filing with the SEC shows that he has kept his top five steady and is continuing his major activist campaigns. This is no surprise, as Ackman is a long-term value investor, particularly successful at special situations. Outlined below are Ackman’s top five, so let’s check them out (check out Pershing’s latest picks).

Pershing’s top stock remains Canadian Pacific Railway Limited (NYSE:CP), making up 31.2% of the fund’s 13F portfolio going into the second quarter. Canadian Pacific is Ackman’s best-performing stock year-to-date among his top five, up nearly 33%, while the remaining four holdings managed to underperform the S&P 500 over the same period. Canadian is expected to see a 9.3% increase in revenue in 2013; this should come as volumes improve (1.4% expected growth year-over-year) and higher average revenue per car (8.1% growth expected).

One of Canadian Pacific Railway Limited (NYSE:CP)’s big initiatives is to reach an operating ratio of 65% by 2016. To do this, the company is upgrading its network by consolidating facilities. The company expects to increase train length by 11% on transcontinental routes in 2013.

Longer term, Canadian Pacific Railway Limited (NYSE:CP) expects coal deliveries to be a significant driver of revenue growth. This includes a shift to metallurgical coal, which makes up 80% of the company’s transportation, which reduces exposure to the current weakness in the domestic thermal coal market.

However, I’d be remiss if I didn’t touch on how expensive Canadian Pacific Railway Limited (NYSE:CP) appears to be; the stock trades at 43 times earnings, whereas Canadian National Railway (NYSE:CNI) is at 19 times and Kansas City Southern (NYSE:KSU) is at 31 times.

In second is the mega-cap turnaround story, The Procter & Gamble Company (NYSE:PG) , which makes up 21.2% of Pershing’s portfolio. P&G will ultimately be a big benefactor of innovation and growth in new markets and categories, namely due to its position in developing markets.

The big win for Ackman of late includes the fact that P&G has brought back A.G. Lafley as CEO following the stepping down of Robert McDonald. This comes after Ackman noted that McDonald’s time was running out.

Billionaire Warren Buffett tops Ackman in owning shares of P&G, with Buffett and Berkshire owning double Ackman’s shares, and with nearly 5% of the fund invested in the company (check out Buffett’s latest bets). Ackman sees nearly 60% upside in the stock, and although I’m not as bullish on the stock, I still see upside for the stock at more than 25%.

Pershing’s third-largest holding is General Growth Properties, making up 14.7% of its portfolio. The REIT owns interests in, or management responsibility for, a portfolio of more than 200 shopping malls in 43 states. The dividend yield is at 2.3%.
BEAM Inc (NYSE:BEAM) is Pershing’s fourth-largest stock holding and makes up 13% of the public-equity portfolio. Beam is result of Fortune Brands’ divestiture of its home-improvement and golf-related businesses in October 2011.

Over the next five years, analysts expect the company to grow EPS at an annualized rate of 11.7%. This should be spurred by growth in its bourbon category, as well as further expansion in emerging markets.

I see BEAM Inc (NYSE:BEAM) as an underrated investment for the most part; Ackman does have fellow billionaire Ken Griffin as one of the top hedge fund shareholders of Beam (see Griffin’s latest shakeups). 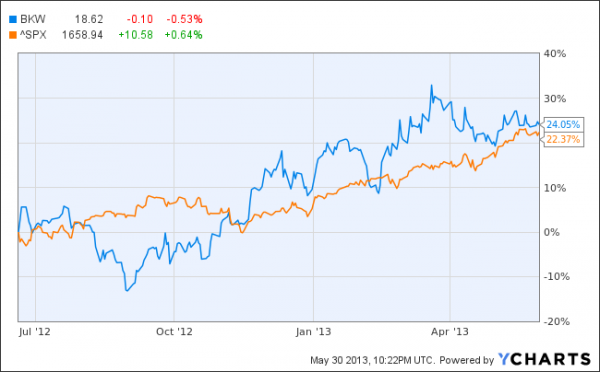 Billionaire Ackman has kept his activist campaign in full swing during the first part of the year. I think that Canadian Pacific Railway Limited (NYSE:CP) appears to be a bit expensive. Meanwhile, I think that The Procter & Gamble Company (NYSE:PG) has upside as a mega-cap turnaround.
General Growth Properties is an interesting play in the REIT space, which should perform nicely on the back of a rebounding economy. The other big bet from Ackman is BEAM Inc (NYSE:BEAM), which seems to be performing nicely and should continue to rise with initiatives in new markets. As well, Burger King Worldwide Inc (NYSE:BKW) is executing a solid turnaround.

Marshall is a member of The Motley Fool Blog Network — entries represent the personal opinion of the blogger and are not formally edited.