Does Canadian Imperial Bank of Commerce (USA) (NYSE:CM) represent a good buying opportunity at the moment? Let’s briefly check the hedge fund sentiment towards the company. Hedge fund firms constantly search out bright intellectuals and highly-experienced employees and throw away millions of dollars on research activities, so it is no wonder why they tend to generate millions in profits each year. It is also true that some hedge fund players fail unconceivably on some occasions, but their stock picks have been generating superior risk-adjusted returns on average over the years.

Canadian Imperial Bank of Commerce (USA) (NYSE:CM) was in 18 hedge funds’ portfolios at the end of the third quarter of 2016. CM shareholders have witnessed an increase in hedge fund sentiment in recent months. There were 14 hedge funds in our database with CM positions at the end of the previous quarter. The level and the change in hedge fund popularity aren’t the only variables you need to analyze to decipher hedge funds’ perspectives. A stock may witness a boost in popularity but it may still be less popular than similarly priced stocks. That’s why at the end of this article we will examine companies such as Waste Management, Inc. (NYSE:WM), The Blackstone Group L.P. (NYSE:BX), and Activision Blizzard, Inc. (NASDAQ:ATVI) to gather more data points.

At Q3’s end, a total of 18 of the hedge funds tracked by Insider Monkey held long positions in this stock, an increase of 29% from the second quarter of 2016. On the other hand, there were a total of 14 hedge funds with a bullish position in CM at the beginning of this year. With the smart money’s positions undergoing their usual ebb and flow, there exists an “upper tier” of notable hedge fund managers who were increasing their stakes significantly (or already accumulated large positions). 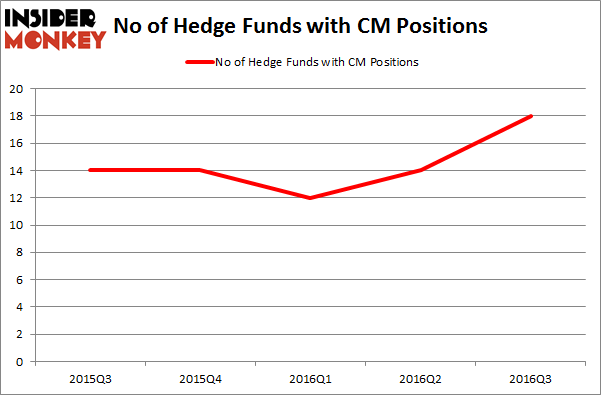 Of the funds tracked by Insider Monkey, AQR Capital Management, led by Cliff Asness, holds the biggest position in Canadian Imperial Bank of Commerce (USA) (NYSE:CM). AQR Capital Management has a $134.2 million position in the stock. The second largest stake is held by Jim Simons’ Renaissance Technologies, holding a $46 million position. Remaining members of the smart money that hold long positions comprise Peter Rathjens, Bruce Clarke and John Campbell’s Arrowstreet Capital, D. E. Shaw’s D E Shaw and John Overdeck and David Siegel’s Two Sigma Advisors. We should note that none of these hedge funds are among our list of the 100 best performing hedge funds which is based on the performance of their 13F long positions in non-microcap stocks.