One of the best competitive advantages a company can create is built using what’s called a network effect. The more users a company has, the more users it attracts, which attracts more users and the cycle continues. Visa Inc (NYSE:V) has created one of the best network effects in the world with its massive payment processing system, building a lead over Mastercard Inc (NYSE:MA) and American Express Company (NYSE:AXP), who are the two other big players in the business.

One result of this has been strong revenue growth since Visa Inc (NYSE:V) stock went public. 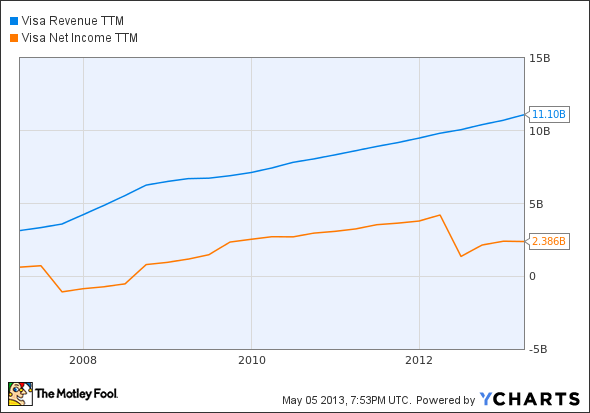 Visa’s hold on payment processing is so strong that merchants were forced to sue in 2005, a lawsuit that was settled in 2012 and resulted in the lower profit you see above. Merchants have little choice but to accept Visa Inc (NYSE:V) and even though they’re now allowed to charge more for using a credit card, they’re unlikely to do so.

Competition is growing
Plenty of competitors can see Visa’s success and are eyeing the company’s dominance. Mastercard Inc (NYSE:MA) has made inroads and grew gross dollar volumes by 12% in the first quarter to $947 billion and now generates 69% of its revenue overseas. Visa only grew 7% to $1,025 billion in payment volume so Mastercard Inc (NYSE:MA) is taking share. American Express Company (NYSE:AXP processes less than a quarter what Mastercard and Visa Inc (NYSE:V) do in a year and it isn’t growing as quickly as either company so it’s a two-horse race at the top.

Competition may try to encroach on Visa’s space, but it will continue to hold either first or second place in payment processing for years to come.

To buy or not to buy Visa stock?
The challenge is that Visa Inc (NYSE:V) isn’t a cheap stock by any measure. It trades at 49.9 times trailing earnings and 20.8 times forward earnings estimates. That’s slightly more than Mastercard Inc (NYSE:MA)’s 18.4 forward P/E multiple but isn’t outrageous considering its competitive advantage.

I think Visa Inc (NYSE:V)’s stock can outperform the market and I’ll give an outperform call over the next five years. If shares slip and become a better value, it would even be worth doubling down on.

The article Can Visa Stock Outperform the Market? originally appeared on Fool.com and is written by Travis Hoium.

Fool contributor Travis Hoium has no position in any stocks mentioned. The Motley Fool recommends American Express and Visa. It recommends and owns shares of eBay and MasterCard.