Can This Save Zynga Inc (ZNGA)’s Farm?

Well, in order to find some answers let us start this analysis by remembering why this happened. It all started at the beginning of this month, when Zynga fired 18% of its staff (520 people) and shuttered its New York, Dallas and Los Angeles offices. It went as far as closing the OMGPOP Studio (which developed the Draw Something game series) only 1 year after acquiring it for $200 million. The reason for all these sudden changes? According to Mark Pinucs, it’s all about “transition.” Zynga Inc (NASDAQ:ZNGA) is to become a very different company, with a stronger focus on mobile, much less Facebook dependence and real money gambling sites (currently available in the U.K., and if legalization happens, probably also in the U.S. someday). But there are transitions and transitions. What kind is this to be? 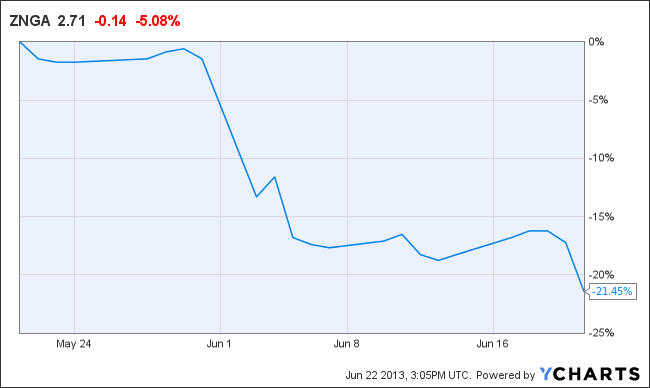 It is not the absence of cash (as Zynga Inc (NASDAQ:ZNGA) is said to have $1.6 billion in cash and cash equivalents), but the absence of revenue growth. Zynga’s revenue is decreasing at high speed and so far it is not showing any signals of slowing down. Revenue is decreasing because Zynga’s average revenue per daily active user (ARPDAU) is decreasing. This is both because an active user spends less money than before and because there are less active users. While MAU in Q4 2014 was 298 million, in Q1 2013 it was 253 million, showing that Zynga Inc (NASDAQ:ZNGA) lost 16% of its MAU in a single quarter. Furthermore, the second quarter may be even worst than the 16% MAU decrease in the first quarter. According to Pincus (latest earnings call, April 24):

“2013 remains a transition year and we continue to expect uneven, non-linear results. To that end, we’re expecting a significant decline in our Q2 bookings”.

Zynga’s problem of keeping its user base growing and its users engaged is not new. For example, in an excellent 2011 valuation paper by Forro, Cauwels and Sornette, the instability of some of the most emblematic of Zynga’s games DAU was shown clearly. Zynga games were starting to show a short unstable decreasing cycle. Between July 2009 and April 2010, Zynga’s DAU increased thanks to Farmville’s increasing popularity. But everything changed after July 2010. With the launch of Cityville in January 2011, Zynga Inc (NASDAQ:ZNGA) managed to recover some DAU back. But a couple of months later Zynga’s DAU continued decreasing. The problem could not be solved with launching more similar games: Facebook dependent, non-mobile social games were losing popularity very fast, while mobile games on other platforms were becoming more and more popular. 2010 was a great time to focus on mobile or launch a real money gambling site. But the company continued producing the same type of games. 2011 was a great time to make a transition. But 2013 may be way too late. Now, there are hundreds (if not thousands) of companies and startups all over the world devoted to developing and producing mobile games. There are a dozen companies very good at marketing real money gambling sites that are waiting for legalization of online gambling in the U.S. to happen, so they can join one of the soon-to-be hugest markets in the segment. And the popularity level of Zynga’s characters and other intellectual property related to Farmville is not the same as in 2010. A transition under these conditions is certainly going to be difficult and complex. And I’m not sure that massive layoffs are a step towards progress considering that by laying off engineers, designers and other personel you are losing deployment power and inevitably enhancing organizational stress that may be adverse to innovation. It may be better for us investors to watch this transition from the sidelines.