Shares of banking powerhouse Wells Fargo & Co. (NYSE:WFC) reached a 52-week high on Monday. Let’s take a look at how it got here to find out if the company’s stock price can grow even higher.

How it got here
The immediate spur to Wells Fargo & Co. (NYSE:WFC)’s market price was last week’s bank stress test results from the Federal Reserve. To everyone’s relief, 17 of the 18 test subjects passed, some quite easily. Wells Fargo & Co. (NYSE:WFC) was safely within that 17 (in case you hadn’t heard and were wondering, by the way, the one failure was Ally Financial). The passers even included the klutzy incumbents Bank of America Corp. (NYSE:BAC) and Citigroup Inc. (NYSE:C), both of whom continue to have their share of problems after emerging from last decade’s financial crisis.

The tests assumed plenty of stress — the key figures the Fed used for its worst-case scenario were an average 4% cratering of real GDP this year, unemployment pole-vaulting over 12% by Q2 2014, and home prices losing 20% of their value in the next two years. That’s not an easy exam to pass, and the fact that nearly all banks made the grade has lifted bullish feeling for the sector as a whole.

It’s also provided a jolt to the stock prices of nearly every winner. Bank of America Corp. (NYSE:BAC), Citi, and Wells Fargo & Co. (NYSE:WFC) have all jumped past the S&P 500 from just before the tests till now. As have fellow big gun JPMorgan Chase & Co. (NYSE:JPM) and — let’s pick a solid representative among the regional players — BB&T Corporation (NYSE:BBT). 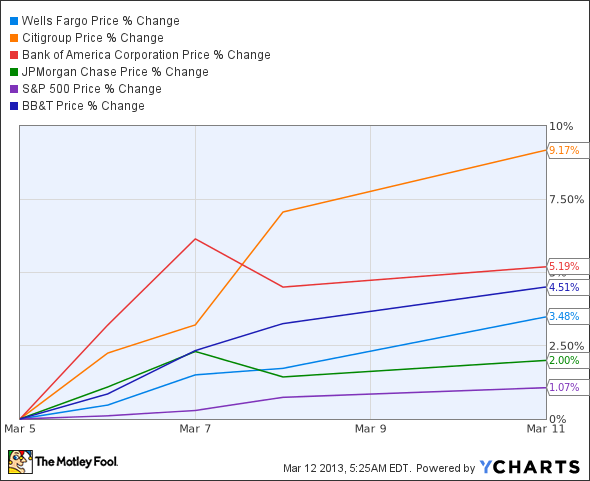 Nearly all of these stocks are, like Wells Fargo & Co. (NYSE:WFC), teasing their one-year highs(save for BB&T, which is still a few bucks short of its $34.37 peak ). Yes, even Bank of America Corp. (NYSE:BAC) and Citi, who suffer from an apparently chronic shortage of investor love, have traded up recently.

Home equity
Beating the stress test was the most recent in a series of nice wins for Wells Fargo & Co. (NYSE:WFC). Since the comeback of the housing market, the company has been driving ahead on the fuel of mortgages. It is, famously, far and away the top housing lender in the country, holding about one-third of the market — and boy, is that market big.