Can The Boeing Company (BA) Stock Fly Any Higher?

The Boeing Company (NYSE:BA) shares tend to stick close to the Dow Jones Industrial Average in the long run. This makes sense on the face of it, because Boeing is a member of the august index and helps set the tone of the Dow.

But that all changed in 2013, when The Boeing Company (NYSE:BA) shares took off like a fighter jet, leaving its Dow peers far behind: 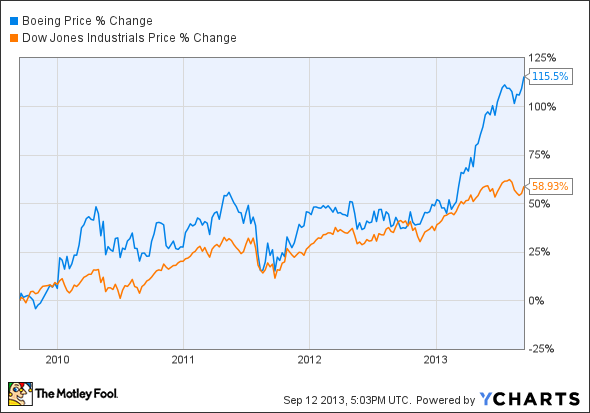 Does this rocket ride have staying power, or should we expect Boeing to come back to earth again?

For The Boeing Company (NYSE:BA), the answer to that question will always depend on the commercial airliner market. That division accounts for two-thirds of Boeing’s revenue and more than 80% of operating profit, which turns its government contracts into a nearly irrelevant sideshow for investors.

Drilling down even deeper into that crucial division, Boeing is betting big on the 787 Dreamliner jumbo jet. The space-age jet is built out of lightweight composite materials and will save airline operators a significant amount of fuel per passenger carried. These characteristics are obvious selling points that should lift The Boeing Company (NYSE:BA)’s fortunes for years to come — if two crucial assumptions play out as planned.

One is that the competition doesn’t catch up to The Boeing Company (NYSE:BA)’s technological advantage right away. Largest rival Airbus has been working on a similar design known as the A350 since 2004. The A350 made its first test flight this summer and enters airline service in 2014, which gives Boeing about a year’s worth of exclusive sales in this category.

The other vital assumption is that the Dreamliner is, in fact, fit to fly.

Battery problems have caused fires on three Dreamliners this year. That’s bad for Boeing in at least two ways: Airlines might hold back on 787 orders until Boeing proves that the fire hazards are long gone, and consumers might worry that Dreamliner flights are not safe. These fears can linger long after the actual danger is gone.

But the stock has soared even as the fire drama has unfolded. Boeing investors don’t seem overly worried about their premium product’s viability on the open market, and Boeing itself keeps churning out new variations on the basic Dreamliner design.

Boeing CEO Jim McNerney chalks the drama up to regular growing pains: “The reliability of this airplane is about the same as the reliability that we’ve had introducing new models, including the most successful widebody we’ve ever introduced, the 777,” he said in Boeing’s most recent earnings call. “When you look at the data and we monitor public opinion, working with our airline customers as to how they feel about Boeing and the 787, the support for this airplane remains high.”

The Dreamliner has certainly been good for Boeing’s sales and cash flows in recent quarters. The Airbus A350 may slow Boeing’s rocket ride down a bit in 2014, but I don’t expect a crash-landing. The current high share prices look like the new normal for Boeing investors.

The article Can Boeing Stock Fly Any Higher? originally appeared on Fool.com and is written by Anders Bylund.

Fool contributor Anders Bylund holds no position in any company mentioned. Check out Anders’ bio and holdings or follow him on Twitter and Google+. The Motley Fool has a disclosure policy. We Fools may not all hold the same opinions, but we all believe that considering a diverse range of insights makes us better investors.