Can Hewlett-Packard Company (HPQ) Hold On to Its Dow Seat?

The Dow Jones Industrial Average is a pretty stable group. Only three of the 30 current members have joined in the last four years. The entire index was unchanged for 27 years, between 1959 and 1976. All in all, the roster has changed just 49 times since its inception in 1884 for an average of 2.6 years between every iteration.

But there might be change afoot again less than a year after UnitedHealth Group Inc. (NYSE:UNH) snagged a seat. Kraft Foods Group Inc (NASDAQ:KRFT) split into two companies that didn’t have enough individual heft to stay on the Dow, leaving a spot open for the health insurance giant. UnitedHealth has outperformed both the Dow and the core Kraft ticker by a hair since that index change.

I can smell another breakup like Kraft’s coming. This time, analysts and activist investors agree that Hewlett-Packard Company (NYSE:HPQ) would be better off if the company were split up and sold for parts.

Investors might benefit from HP separating into a consumer business and an enterprise vendor, because this would give the company a chance to allocate the right resources where they are needed — without trampling on the concerns of the other half. CEO Meg Whitman doesn’t like the idea at all, noting that turnarounds of this magnitude take lots of time. In this case, HP’s recovery could be five years away.

Moreover, HP’s sector is going through some major changes right now. On the consumer side, PC systems are losing mind share and market share to tablets and smartphones. Meanwhile, cloud-based services have overthrown the traditional server market. Even if HP does the sensible thing and splits up, each segment would still have a hard time turning its fortunes around.

For what it’s worth, a split would almost certainly remove HP from the Dow for much the same reasons Kraft had to go. Two tickers can’t inhabit one Dow slot, and the united company is already the third-smallest of all 30 Dow members. The stock has lost 65% of its value over the last three years, and cutting it in half again would kill its standing as a credible blue-chip investment. 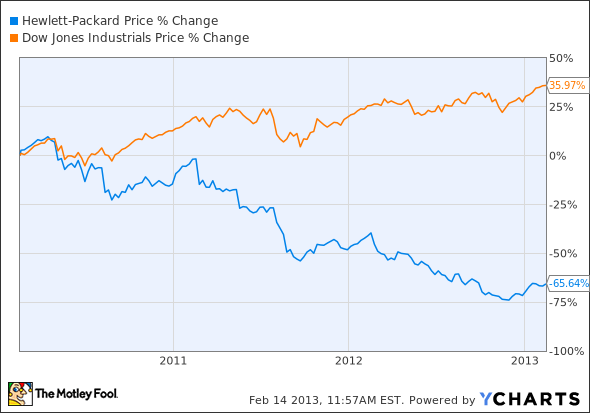 Keep an eye out for news on HP’s future, because there might be some Dow drama written between the lines.

The article Can HP Hold On to Its Dow Seat? originally appeared on Fool.com and is written by Anders Bylund.

Fool contributor Anders Bylund holds no position in any company mentioned. Check out Anders’ bio and holdings or follow him on Twitter and Google+. Motley Fool newsletter services have recommended buying shares of UnitedHealth Group.