Campbell Soup Company (NYSE:CPB) recently reported its third quarter earnings, which came in above analyst estimates on both the top and bottom lines. The stock, which is often considered to be a slow-growth name in the packaged foods industry, has made a surprising comeback over the past year, rallying 37% over the past twelve months to hit all-time highs. What prompted this sudden interest in Campbell Soup Company (NYSE:CPB), and should investors expect the stock to keep climbing? 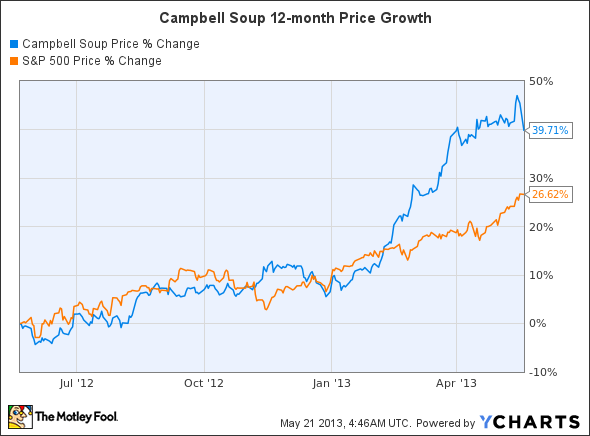 For its third quarter, Campbell Soup Company (NYSE:CPB) earned $0.57 per share, or $181 million, up from $0.55 per share, or $177 million, in the prior year quarter. Revenue rose 15% to $2.09 billion, and 4% on an organic basis, which excludes acquisitions and currency impacts. Analysts had been expecting Campbell Soup to earn $0.56 per share on revenue of $2.0 billion.

Campbell Soup is well-balanced both domestically and internationally, with a diverse portfolio of packaged meals, snacks, soups and beverages. During the third quarter, the company posted positive growth in all segments except for its North American Foodservice and U.S. Beverages segments.

Campbell Soup Company (NYSE:CPB)’s U.S. Simple Meals segment, which include its soups and sauces, benefited from an 11% increase in sales volume and product mix. Cold weather and new products helped drive demand for hot soup. Sales of its U.S. soup brands, which include condensed, ready-to-eat and broths, all rose by double digits.

Ready-to-eat brands, such as its Chunky Soup label, surged 18% thanks to new soup varieties and heavier advertising during NFL events. Putting soup in pouches, rather than cans, also attracted a new demographic of younger and more affluent shoppers. The segment’s operating income rose 30% year-on-year, aided by higher prices.

CEO Denise Morrison helped turn around the ailing soup segment after two years of consecutive sales declines. Her tactic was to improve the taste of its existing soups, add more diverse products, and trim advertising costs by focusing on core demographics. She expressed confidence in the soup segment, stating, “We are confident that we can now drop the word ‘stabilize’ from our strategy.”

The global baking and snacking segment produces bread, cookies, snacks and other baked goods. The segment, which includes Pepperidge Farm, benefited greatly from the bankruptcy of Hostess, which makes Wonder Bread, Twinkies and other baked snacks. However, increased marketing and administrative costs caused operating income to come in flat.

Internationally, Campbell Soup Company (NYSE:CPB)’s prepared meals and beverages demand was high in Latin America, Europe and the Asia-Pacific region. However, demand in Canada declined. However, the segment’s surprisingly robust performance in Europe fueled an 8.1% rise in operating income.

Demand for its U.S. beverages, especially V8, remained low. The 5% slump in sales also led to a 26.7% decline in operating income, due to lower sales volume and higher promotional expenses. Morrison stated that the company is using the same approach it used with its soup business – improving the taste and diversifying into new flavors – to revive its V8 business. Morrison specifically mentioned V8 energy drinks as a possible avenue of growth. However, she acknowledged that the shelf-stable juice business is a competitive, slow growth market.

Lastly, although its newly acquired Bolthouse Farms business generated $205 million in sales, it is in the same segment as Campbell Soup’s lagging North American Foodservice division. The Foodservice division’s loss was due to the loss of a major restaurant contract. Yet gains in Bolthouse’s premium juice business helped offset those losses, and operating income rose 35% to $27 million.