Japan’s Fukushima disaster caused a public backlash and the call for the removal of nuclear power. Japan’s previous plans to increase nuclear power to meet half of the country’s needs have been scrapped.  The lost growth is a negative for the nuclear industry, but Japan is trying to export its nuclear technology to Saudi Arabia. The developing Saudi-Japanese partnership will help to ensure a steady supply of oil for Japan and support uranium demand.

Oil isn’t called black gold without reason. Saudi Arabia has a huge supply of cheap, conventional oil that supports the royal family and the state. The nation does have its challenges. Building an empire in the middle of a desert requires large amounts of fresh water and air conditioners. A large portion of Saudi Arabia’s water comes from energy intensive desalinization plants.

More than half of Saudi Arabia’s electricity is generated from oil. This comes at a huge opportunity cost for the nation. If it could generate its electricity from a cheaper energy source like uranium, then it could sell more oil on the open market. 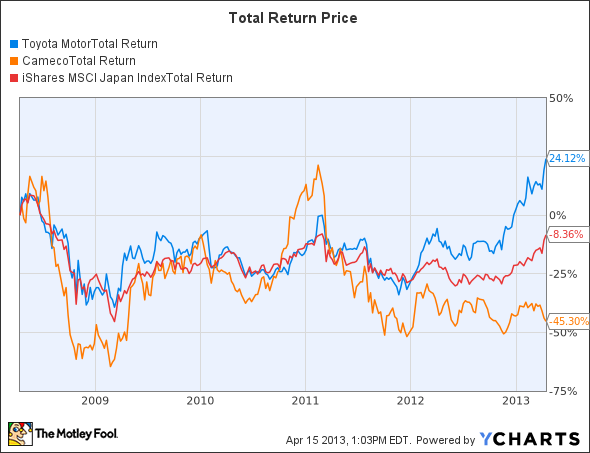 Which Uranium Miners Will Benefit?

Cameco Corporation (USA) (NYSE:CCJ) is one of the strongest pure-play uranium miners. It is active in Canada, Australia, Mongolia, and the U.S. Canada is trying to diversify itself from being too dependent on the U.S. To help achieve this goal, the Canadian government has been courting major Asian powers and this has helped Cameco Corporation (USA) (NYSE:CCJ) to make big sales in China.

Cameco Corporation (USA) (NYSE:CCJ) is in a great position to grow. It has little debt with a total debt to equity ratio of just 0.31. Its return on investments of 4.2% could be higher, but it is positive considering the negative effects of Fukushima on the industry. The firm’s profit margin of 11.4% gives a margin of safety and makes Cameco Corporation (USA) (NYSE:CCJ) a strong investment.

How Will Japan Benefit?

Japanese manufactures like Toyota Motor Corporation (NYSE:TM) will benefit from a steady supply of oil. Even though sales of electrically powered cars continue to grow, the majority of vehicles use gasoline or diesel fuel. In the first quarter of 2013, just 20% of Toyota Motor Corporation (NYSE:TM)’s European sales were hybrids. If Japan successfully exports their nuclear knowledge, then Saudi Arabia’s crude oil export capacity will increase because of a decrease in domestic Saudi use. This will help to keep gasoline prices low and ensure that people continue to drive and buy cars.