Whose portfolio couldn’t use a little Vitameatavegamin? Not everything has soared in this run to Dow 15,000. Maybe you need a little diversification and are looking for some promising small caps.

You probably remember the classic I Love Lucy skit where Lucy gets drunk while filming a commercial for the alcohol-laced tonic. But seriously, using the Motley Fool.com stock screener (look under the CAPS tab) I discovered three portfolio perker-uppers. These food and beverage related stocks likely aren’t on your radar but should be. Mmm, and they’re so tasty, too. Calavo Growers, Inc. (NASDAQ:CVGW), Seneca Foods Corp (NASDAQ:SENEA), and National Beverage Corp. (NASDAQ:FIZZ). All have 4 or 5 star CAPS ratings and insider ownership. This total return chart speaks volumes about the peppy power of these small cap names. 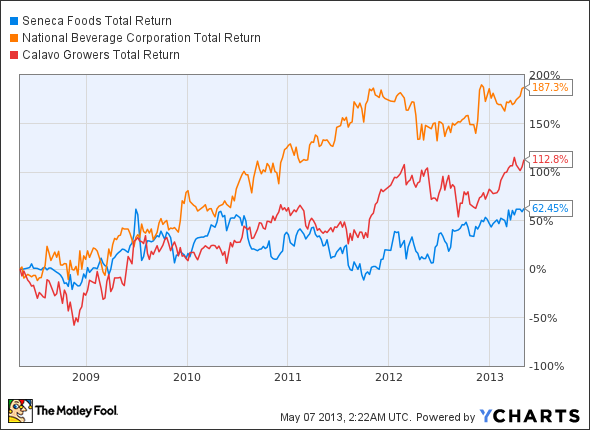 Calavo Growers, Inc. (NASDAQ:CVGW), which grows and distributes avocados, avocado products, tomatoes, mangoes, and pineapples has been surging thanks to the huge popularity of salsa, hummus, tortilla chips, and guacamole, all of which it makes. Salsa overtook catsup some time ago as most popular US condiment and hummus is an up-and-comer. Calavo Growers’ future growth trajectory is particularly bright with its recent promotion and advertising campaigns on the internet and television.

Although some of its latest success is attributable to the growing US Hispanic population, avocados are exponentially more popular globally than a decade ago. Calavo Growers, Inc. (NASDAQ:CVGW) has a 25 trailing P/E and a 17 forward P/E and offers a 2.20% yield at a 57% payout ratio. Margins have remained stable over the last five years and as Fellow Fool Seth Jayson concludes, Calavo looks fine.

There’s much to like about Calavo Growers, Inc. (NASDAQ:CVGW) like its 18.61% insider hold but one concern is the compensation of major officers is high for a company with only a $437.1 million market cap. Chairman and CEO Lee Cole receives $1.4 million. The compensation issue brings their corporate governance risk score to 5.

The company is moving into the cloud with its own fresh food technology platform company, Fresh Realm LLC. The platform will link fresh food producers to communities and food banks in a national ecosystem. Announced in March it’s too early to tell what effect, if any, to the bottom line but it does show they’re tech-savvy.

Sales, dividend, and EPS growth for the last five years were in the teens with EPS growth at 17% and dividend growth at 13%. Only four analysts cover it (three strong buys and 1 hold) and give a five year EPS growth rate of 15% with a median price target of $30.00.

Is the answer to your problems in a bottle?

National Beverage Corp. (NASDAQ:FIZZ) manufactures and distributes soft drinks, waters, juices, energy drinks and shots, sport drinks and teas and lemonades under various brands. They’re not well-known brands like those of  much larger rivals The Coca-Cola Company (NYSE:KO), PepsiCo, Inc. (NYSE:PEP), and Dr Pepper Snapple Group Inc. (NYSE:DPS), although you may have heard of Shasta and Faygo. Its trailing P/E and P/S are lower than these competitors at 14.68 and 1.03.

The price target is $16.75 for 12% upside. National Beverage Corp. (NASDAQ:FIZZ) is a trade down name with the motto of its Big Shot soda,”Even if you don’t have a million bucks, let people know you’re a big shot.” National Beverage has to fight for shelf space but with its 12 strategically located US manufacturing facilities and lean workforce of 1,200 it is still the fourth largest soda company in the US.

Its energy drink may not have the alcoholic kick of Vitameatavegamin but their energy drink Rip It volume gains were up double digits as were those of LaCroix water. Their special dividends also have a kick and have totaled $8.66 per share since 2004, the last of $2.55 a share in December.

Caveat: the company borrowed $60 million to pay it and as Fellow Fool Dan Caplinger wrote, ” Much of the benefit went to CEO Nick Caporella, who directly or indirectly owns 74% of the company’s shares, and therefore reaped roughly $87 million from the special dividend.”

At a market cap of $680 million it’s frequently bandied about as a takeover target. It could be a good match for Dr. Pepper Snapple.

It is a food processor and distributor of fruits and vegetables and its best known brands are Stokely’s, Seneca Foods Corp (NASDAQ:SENEA), and Libbys. Only 9% of sales come from its proprietary brands, 55% from private label, 23% to institutional foodservice, and the rest  for processing Green Giant for General Mills under an alliance agreement. Its main competitors are Fresh Del Monte Produce Inc (NYSE:FDP), Pinnacle Foods Inc (NYSE:PF), and Dole Food Company, Inc. (NYSE:DOLE).