While the market driven by short-term sentiment influenced by uncertainty regarding the future of the interest rate environment in the US, declining oil prices and the trade war with China, many smart money investors are keeping their optimism regarding the current bull run, while still hedging many of their long positions. However, as we know, big investors usually buy stocks with strong fundamentals, which is why we believe we can profit from imitating them. In this article, we are going to take a look at the smart money sentiment surrounding CAI International Inc (NYSE:CAI).

Is CAI International Inc (NYSE:CAI) the right pick for your portfolio? Hedge funds are turning bullish. The number of bullish hedge fund positions increased by 1 in recent months. Our calculations also showed that cai isn’t among the 30 most popular stocks among hedge funds.

How have hedgies been trading CAI International Inc (NYSE:CAI)?

Heading into the fourth quarter of 2018, a total of 15 of the hedge funds tracked by Insider Monkey held long positions in this stock, a change of 7% from the previous quarter. On the other hand, there were a total of 12 hedge funds with a bullish position in CAI at the beginning of this year. With hedgies’ positions undergoing their usual ebb and flow, there exists a few key hedge fund managers who were upping their holdings considerably (or already accumulated large positions). 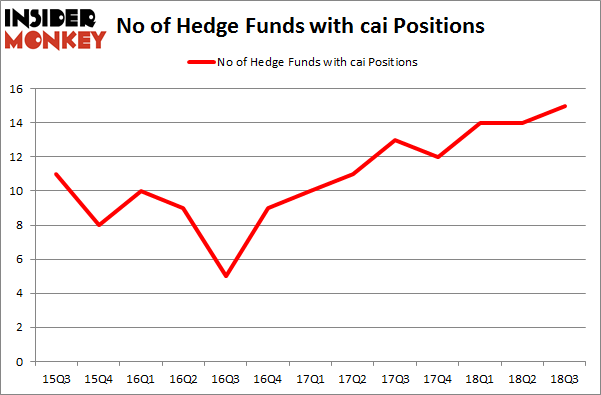 Among these funds, Park West Asset Management held the most valuable stake in CAI International Inc (NYSE:CAI), which was worth $36.7 million at the end of the third quarter. On the second spot was Royce & Associates which amassed $13.6 million worth of shares. Moreover, Weiss Asset Management, Lonestar Capital Management, and Mangrove Partners were also bullish on CAI International Inc (NYSE:CAI), allocating a large percentage of their portfolios to this stock.

With a general bullishness amongst the heavyweights, key money managers were leading the bulls’ herd. Marshall Wace LLP, managed by Paul Marshall and Ian Wace, assembled the largest position in CAI International Inc (NYSE:CAI). Marshall Wace LLP had $3.6 million invested in the company at the end of the quarter. Matthew Hulsizer’s PEAK6 Capital Management also made a $0.9 million investment in the stock during the quarter. The following funds were also among the new CAI investors: Matthew Hulsizer’s PEAK6 Capital Management and Bradley LouisáRadoff’s Fondren Management.

As you can see these stocks had an average of 6.5 hedge funds with bullish positions and the average amount invested in these stocks was $25 million. That figure was $104 million in CAI’s case. OMNOVA Solutions Inc. (NYSE:OMN) is the most popular stock in this table. On the other hand First Trust High Income Long/short Fund (NYSE:FSD) is the least popular one with only 2 bullish hedge fund positions. CAI International Inc (NYSE:CAI) is not the most popular stock in this group but hedge fund interest is still above average. This is a slightly positive signal but we’d rather spend our time researching stocks that hedge funds are piling on. In this regard OMN might be a better candidate to consider a long position.