Cabot Corporation (CBT): Are Hedge Funds Right About This Stock?

The 700+ hedge funds and money managers tracked by Insider Monkey have already compiled and submitted their 13F filings for the second quarter, which unveil their equity positions as of September 30. We went through these filings, fixed typos and other more significant errors and identified the changes in hedge fund positions. Our extensive review of these public filings is finally over, so this article is set to reveal the smart money sentiment towards Cabot Corporation (NYSE:CBT).

Cabot Corporation (NYSE:CBT) has seen a decrease in activity from the world’s largest hedge funds recently. CBT was in 24 hedge funds’ portfolios at the end of the third quarter of 2018. There were 27 hedge funds in our database with CBT holdings at the end of the previous quarter. Our calculations also showed that CBT isn’t among the 30 most popular stocks among hedge funds.

What does the smart money think about Cabot Corporation (NYSE:CBT)? 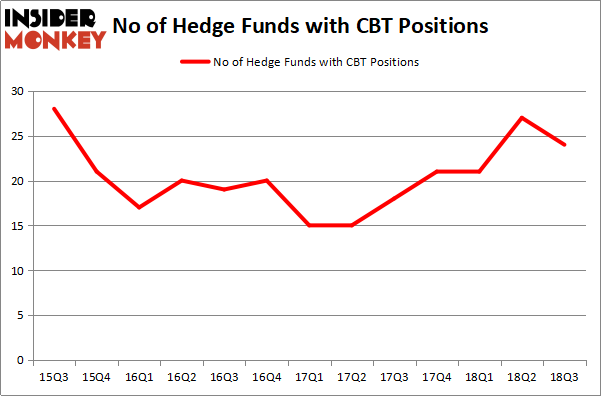 Due to the fact that Cabot Corporation (NYSE:CBT) has experienced a decline in interest from the entirety of the hedge funds we track, logic holds that there were a few hedge funds that decided to sell off their positions entirely in the third quarter. At the top of the heap, Steve Cohen’s Point72 Asset Management sold off the largest stake of the 700 funds tracked by Insider Monkey, worth close to $10.4 million in stock. Michael Platt and William Reeves’s fund, BlueCrest Capital Mgmt., also said goodbye to its stock, about $1.9 million worth. These moves are important to note, as aggregate hedge fund interest dropped by 3 funds in the third quarter.

As you can see these stocks had an average of 15 hedge funds with bullish positions and the average amount invested in these stocks was $220 million. That figure was $202 million in CBT’s case. RLJ Lodging Trust (NYSE:RLJ) is the most popular stock in this table. On the other hand Matador Resources Co (NYSE:MTDR) is the least popular one with only 10 bullish hedge fund positions. Compared to these stocks Cabot Corporation (NYSE:CBT) is more popular among hedge funds. Considering that hedge funds are fond of this stock in relation to its market cap peers, it may be a good idea to analyze it in detail and potentially include it in your portfolio.