Gun sales have surged this year and manufacturers have been on fire. Sturm Ruger recently reported a 50% increase in net sales for its second quarter. Smith & Wesson, the other major American firearms manufacturer, saw record sales during its last quarter– reporting an increase in sales of 43%.

Ruger’s CEO, Mike Fifer, told analysts at a recent conference that, “We haven’t seen any slowing in demand for Ruger products… But we have heard anecdotally that the normal seasonal slowdown is starting.” Fifer also acknowledged that gun demand seems to be heading back down to “more normalized growth rates.”

Firearm sales contribute to the majority of Ruger’s earnings, so a sharp drop in these firearms sales could cause an equally sharp drop in the share price. The company’s profits soared to a 20-year high in 2012, but it is unlikely that this trend is sustainable. Smith & Wesson is in a similar boat.

While Cabelas Inc (NYSE:CAB) is also sensitive to a drop-off in gun sales like the manufacturers, it is also better insulated to weather a decline as well, due to its diversification.

Sporting-goods stores will allow you to continue to capture exposure from the surge in gun sales, but will also have other revenue streams to fall back on if the trend reverses.

Like Cabelas Inc (NYSE:CAB), Dicks Sporting Goods Inc (NYSE:DKS) sells guns and ammunition, which account for as much as 10% of total sales, according to  analyst Alan Rifkin. Rifkin further elaborated that “Dick’s faces significant headline risk given the controversy surrounding this category,” but also remained bullish on the stock long-term because of things such as store growth and e-commerce opportunities. The company carries no debt, which is always a strength and gives it more maneuvering room than more debt-saddled companies. Dick’s also has strong private brands such as Top-Flite golf products that will continue to lure customers and will contribute to future growth..

Shares of Big 5 Sporting Goods Corporation (NASDAQ:BGFV) have more than doubled this year. The company credited firearm and ammunition sales for a large part of its double-digit same-store sales growth in its first quarter, but also pointed out that sales of non-gun-related merchandise still rose in the mid-single-digits. Big 5 Sporting Goods Corporation (NASDAQ:BGFV) doesn’t sell products online like its rivals, a problem it plans to address sometime this year– which should create new growth in sales. 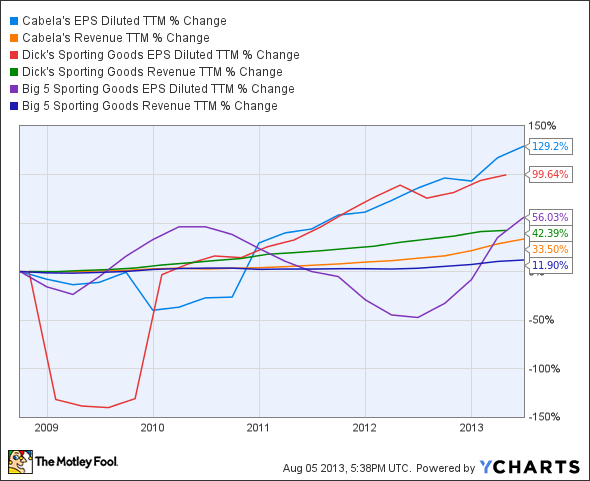 While Big 5 Sporting Goods Corporation (NASDAQ:BGFV) has opportunities for new growth in online sales, and Dick’s also has many growth opportunities– such as an expansion of sales of its private brands, Cabelas Inc (NYSE:CAB) is the current and proven leader in earnings growth.