Intel Corporation (NASDAQ:INTC) has been left out of the spotlight. The blog sphere is alive with talk that the PC is dead, but there is healthy amount of hyperbole in that statement. While research firms are predicting that tablet sales will exceed PC sales, IDC still expects 333 million PCs to be sold in 2017. Dominating a market with 333 million unit sales is not a shabby prospect.

In the mobile market Intel’s current partnership with Microsoft hasn’t turned out very well. Even Microsoft was forced to develop an ARM compatible OS, Windows RT. Intel’s mobile struggles have hurt the company’s pride, but its huge R&D budget means that it is only a matter of time before it starts to produce more competitive mobile products.

ARM Holdings plc (ADR) (NASDAQ:ARMH) has been a growth darling of the tech industry, but long term investors need to take a deeper look at the numbers. Yes, ARM is dominating the mobile market, but Intel Corporation (NASDAQ:INTC) is fighting tooth and nail to take some of this growth. For instance, Samsung recently announced that it will produce high performance Intel-powered tablets.

ARM Holdings plc (ADR) (NASDAQ:ARMH) is excited about developing 14nm FET technology as a way to squeeze more power and performance into smaller chips. It realizes that it needs to aggressively develop new products if it wants to defend its market share. With Intel expecting its 14nm products to be in production by 2014, the industry will be an excited place over the next couple years. It is important to remember the Intel has made huge fixed investments in its latest plants, and it needs to gain a larger portion of the mobile market to bring down unit costs. 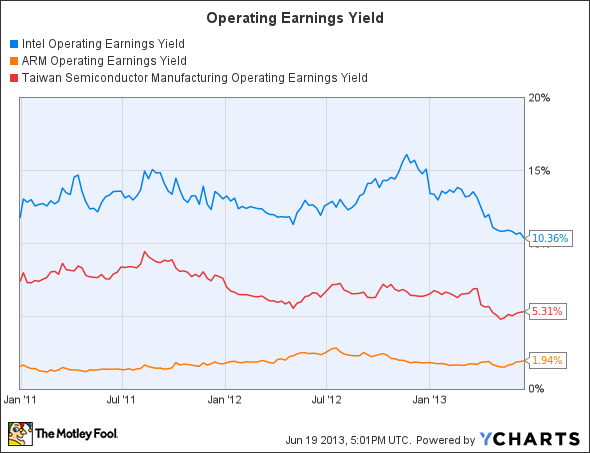 ARM Holdings plc (ADR) (NASDAQ:ARMH)’s profit margin of 22.0% and earnings before interest and taxes (EBIT) margin of 34.4% are better than Intel’s profit margin of 19.5% and EBIT margin of 25.7%, but both companies are very profitable. Intel Corporation (NASDAQ:INTC) has little debt, with a total debt to equity ratio of 0.26, while ARM has no debt. While many people look at Intel’s -15.0% one year earnings per share (EPS) growth rate, this number over-emphasizes short term elements as Intel’s one year revenue growth rate is only -1.2%.

As Intel ramps up its mobile operations, Taiwan Semiconductor Mfg. Co. Ltd. (ADR) (NYSE:TSM) is another company that will feel the heat. This company manufactures wafers and integrated circuit for third parties. Intel Corporation (NASDAQ:INTC)operates a vertically integrated model and if manages to eat up a sizable portion of the mobile market, then Taiwan Semiconductor Manufacturing would see less demand for its services. This is an important risk, as its ten largest customers accounted for 59% of 2012’s net sales.