Buffett is Playing Catch Up: DIRECTV (DTV) and More

Fiscal 2012 was fairly uneventful for Berkshire Hathaway Inc. (NYSE:BRK.B) in terms of acquisitions; Warren Buffett and his loaded rifle found no elephants large or impressive enough to bag. However, this year may be shaping up differently, with a decent-sized acquisition already announced just two months into 2013. With interest rates lower than the average rate of inflation, Berkshire’s cash is losing buying power with every passing day. For that reason, the company must continue to find good investment opportunities in which it can use large amounts of cash. Let’s look at its most recent deal and two possible acquisition candidates.

On Valentine’s Day, Berkshire and 3G Capital wrote a love letter to H.J. Heinz Company (NYSE:HNZ) shareholders, announcing that the two would purchase the company for $72.50 per share. Although Berkshire only receives 50% of the equity in this deal, it will also receive $8 billion of preferred shares yielding 9%, a yield you would be hard-pressed to find elsewhere.

Heinz appears to be a good fit for the Berkshire family. Its brands are well-known and its products are sold world-wide. The company’s return on equity of 35%, a metric Buffett has mentioned as a key determinant of a good business, is the fifth highest in its industry. The business is not exciting, but “boring” is an area in which  Buffett has enjoyed great success.

Berkshire has a massive cash pile, which is growing at more than $1 billion every month. At this rate, Buffett can make a similar acquisition every year without seeing his current cash level diminish.

Berkshire’s stake in satellite television provider DIRECTV (NASDAQ:DTV) has grown steadily since 2011. According to its most recently filed 13F, Berkshire increased its stake in the company by 15% in the 4th quarter of 2012, raising its ownership to 34 million shares.

DirecTV’s market capitalization sits just over $29 billion and Berkshire owns approximately 5.6% of the company as a whole. Backing out its ownership stake, it would cost Berkshire around $33 billion to acquire the rest of DirecTV, assuming a 20% takeout premium. Using the operating income numbers provided in the chart below, Berkshire would acquire the company at approximately seven times operating income. At last year’s shareholders meeting, Mr. Buffett mentioned that he would be interested in a large deal of around $30 billion and DirecTV may just fit the bill. 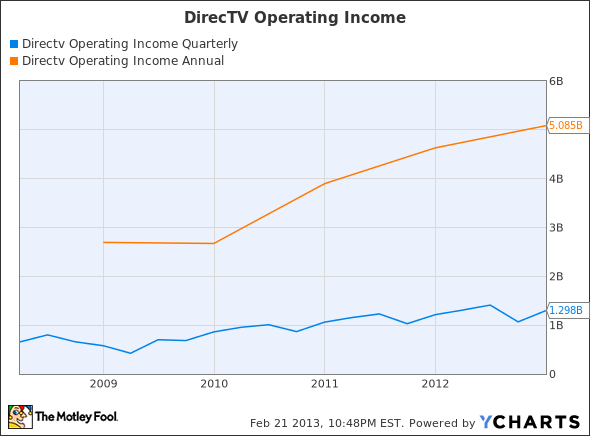 DaVita HealthCare Partners Inc (NYSE:DVA) first appeared in the Berkshire portfolio in Q4 2011, with a purchase of 2.6 million shares. That number has grown significantly since then, with current ownership equaling 13.6 million shares, or 12.9% of the company.

DISH Network Corp. (DISH) Stumbles Along, but the Hopper Is a Winner