“Value has performed relatively poorly since the 2017 shift, but we believe challenges to the S&P 500’s dominance are mounting and resulting active opportunities away from the index are growing. At some point, this fault line will break, likely on the back of rising rates, and all investors will be reminded that the best time to diversify away from the winners is when it is most painful. The bargain of capturing long-term value may be short-term pain, but enough is eventually enough and it comes time to harvest the benefits.,” said Clearbridge Investments in its market commentary. We aren’t sure whether long-term interest rates will top 5% and value stocks outperform growth, but we follow hedge fund investor letters to understand where the markets and stocks might be going. That’s why we believe it would be worthwhile to take a look at the hedge fund sentiment on Brown-Forman Corporation (NYSE:BF) in order to identify whether reputable and successful top money managers continue to believe in its potential.

Brown-Forman Corporation (NYSE:BF) was in 22 hedge funds’ portfolios at the end of September. BF has experienced an increase in support from the world’s most elite money managers in recent months. There were 19 hedge funds in our database with BF holdings at the end of the previous quarter. Our calculations also showed that BF isn’t among the 30 most popular stocks among hedge funds.

According to most investors, hedge funds are assumed to be worthless, old financial vehicles of the past. While there are more than 8,000 funds with their doors open at present, We hone in on the crème de la crème of this club, about 700 funds. These hedge fund managers handle most of all hedge funds’ total asset base, and by tailing their matchless picks, Insider Monkey has unsheathed a number of investment strategies that have historically outperformed the S&P 500 index. Insider Monkey’s flagship hedge fund strategy outperformed the S&P 500 index by 6 percentage points a year since its inception in May 2014 through early November 2018. We were able to generate large returns even by identifying short candidates. Our portfolio of short stocks lost 24% since February 2017 (through December 3rd) even though the market was up nearly 23% during the same period. We just shared a list of 11 short targets in our latest quarterly update.

What does the smart money think about Brown-Forman Corporation (NYSE:BF)?

At Q3’s end, a total of 22 of the hedge funds tracked by Insider Monkey held long positions in this stock, a change of 16% from the previous quarter. The graph below displays the number of hedge funds with bullish position in BF over the last 13 quarters. With hedge funds’ capital changing hands, there exists a select group of key hedge fund managers who were upping their stakes substantially (or already accumulated large positions). 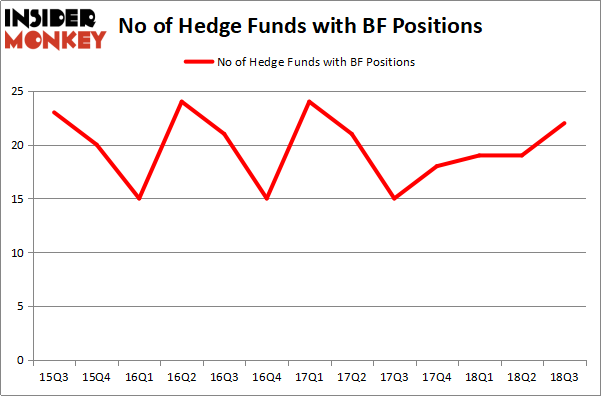 As aggregate interest increased, key hedge funds have jumped into Brown-Forman Corporation (NYSE:BF) headfirst. Millennium Management, managed by Israel Englander, assembled the most outsized position in Brown-Forman Corporation (NYSE:BF). Millennium Management had $98 million invested in the company at the end of the quarter. Ken Griffin’s Citadel Investment Group also made a $52.1 million investment in the stock during the quarter. The other funds with brand new BF positions are Clint Carlson’s Carlson Capital, Dmitry Balyasny’s Balyasny Asset Management, and Michael Platt and William Reeves’s BlueCrest Capital Mgmt..

As you can see these stocks had an average of 25.5 hedge funds with bullish positions and the average amount invested in these stocks was $2.06 billion. That figure was $725 million in BF’s case. United Continental Holdings Inc (NASDAQ:UAL) is the most popular stock in this table. On the other hand Sasol Limited (NYSE:SSL) is the least popular one with only 7 bullish hedge fund positions. Brown-Forman Corporation (NYSE:BF) is not the least popular stock in this group but hedge fund interest is still below average. This is a slightly negative signal and we’d rather spend our time researching stocks that hedge funds are piling on. In this regard UAL might be a better candidate to consider a long position.