Broadcom Corporation (BRCM): Trends that Give It A Buy Rating

Despite a rough 2012 for the entire semiconductor industry, Broadcom Corporation (NASDAQ:BRCM) reported 8% growth in annual revenue. Additionally, it reported an increase in market share for all of its business units; however, net income exhibited a sharp drop predominantly due to an increase in operating costs. 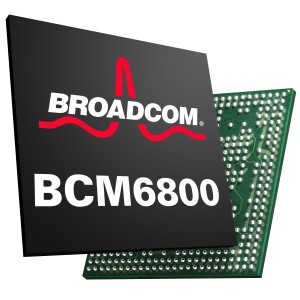 At present, the industry environment might limit Broadcom’s growth in the near term. Nonetheless, robust free cash flows and a promising product road map lined up for the remainder of 2013 enable me to keep a bullish outlook on Broadcom’s stock in the long run.

I believe Broadcom Corporation (NASDAQ:BRCM) has robust fundamentals, and the company’s stock has a higher-intrinsic value than its current trading price. With strong potential upside in its stock, investing in Broadcom provides a reasonable margin of safety for investors. Below is my rationale that underpins a higher stock valuation.

As an investor, it’s absolutely mandatory to understand a company’s revenue streams in order to make the right investment choice. Broadcom‘s wireless connectivity and baseband apps contribute the highest percentage to total revenue, at around 50%. This is followed by home entertainment broadband and licensing, which contributes around 29%, and infrastructure networking at 23%.

Broadcom Corporation (NASDAQ:BRCM) is extremely dominant in the wireless connectivity market, with a market share of 36%. In the mobile baseband and processors market, however, it holds only a 4% market share.

Broadcom Corporation (NASDAQ:BRCM) is a leader in the mobile-wireless market by a significant margin. During 2012, its wireless-connectivity business reported a faster growth rate relative to the overall business.

Broadcom’s wireless-connectivity division, which is primarily comprised of smartphones and tablets, contributes approximately 50% to overall revenue. It must be said that smartphones and tablets are the most promising division within the semiconductor industry, and therefore present massive growth potential in the long run.

It’s worth noting that Broadcom has exhibited its competence in broadening its 5G WiFi chips from routers to various other smart devices. Further, Broadcom plans to target both high-end and mass-market mobile phones by adding NFC Quad-core chips to its product offerings.

Broadcom has enjoyed tremendous success within the wireless connectivity market, especially for mobile devices. Going forward, I expect the trend to continue.

Position in baseband and application processor market can improve

In the baseband and application processor market, Broadcom Corporation (NASDAQ:BRCM) has not enjoyed similar success to what it has experienced in the connectivity-solutions market. As previously noted, the current market share stands at a mere 4%.

Nevertheless, Broadcom has made considerable efforts to improve its mobile product portfolio. It has incrementally developed its 40-nm platform to bolster the 3G business. It recently launched a new 3G platform that manages data at faster speeds and includes the new high-speed packet-access processors for low-end or mid-market smartphones

Broadcom faces a stiff challenge from QUALCOMM, Inc. (NASDAQ:QCOM) in the baseband and application-processor market. Qualcomm is the leader in this segment; however, with Broadcom’s tremendous success in mass-market Android-based mobile phones, I expect Broadcom to grow its market share in this segment and narrow the gap.

Due to a decline in enterprise spending, Broadcom Corporation (NASDAQ:BRCM) marked a weak performance in its infrastructure and networking business division. In the near term, demand is still expected to remain low, as the macroeconomic conditions coupled with seasonal variations will cause a slowdown. Nonetheless, Broadcom’s efforts to bolster its infrastructure and networking business division should spur growth in the long run.

Backed up with NetLogic’s multi-core processor solution, I expect Broadcom to increase the size of its potential target market in infrastructure and networking and generate higher revenue in the future.

Competitive threats that may hinder growth

Texas Instrument has been fairly dominant in the wireless-semiconductor market. At present, itsmarket share in cellular baseband, connectivity solutions and application processors stands at 13%, 12% and 11%, respectively.

Texas Instruments Incorporated (NASDAQ:TXN) ceased all of its baseband operations at the end of 2012 in an effort to increase its OMAP footprint. This has led to a sharp decline in the company’s market share in wireless semiconductors, as cellular baseband generated approximately 60% of total wireless revenue.

The analog semiconductors, which represents the highest-contributing revenue stream for Texas Instruments, possessed a market share of 16% at the end of 2012. Further, gross margin for the same hovered around 52% during the last fiscal year.