As we already know from media reports and hedge fund investor letters, many hedge funds lost money in October, blaming macroeconomic conditions and unpredictable events that hit several sectors, with healthcare among them. Nevertheless, most investors decided to stick to their bullish theses and their long-term focus allows us to profit from the recent declines. In particular, let’s take a look at what hedge funds think about BrightSphere Investment Group plc (NYSE:BSIG) in this article.

BrightSphere Investment Group plc (NYSE:BSIG) investors should be aware of an increase in hedge fund interest lately. BSIG was in 22 hedge funds’ portfolios at the end of September. There were 18 hedge funds in our database with BSIG positions at the end of the previous quarter. Our calculations also showed that BSIG isn’t among the 30 most popular stocks among hedge funds.

If you’d ask most stock holders, hedge funds are seen as unimportant, old investment vehicles of the past. While there are over 8,000 funds with their doors open today, We hone in on the aristocrats of this club, around 700 funds. These hedge fund managers command most of the hedge fund industry’s total capital, and by observing their finest stock picks, Insider Monkey has unearthed a few investment strategies that have historically outrun the broader indices. Insider Monkey’s flagship hedge fund strategy defeated the S&P 500 index by 6 percentage points per year since its inception in May 2014 through early November 2018. We were able to generate large returns even by identifying short candidates. Our portfolio of short stocks lost 24% since February 2017 (through December 3rd) even though the market was up nearly 23% during the same period. We just shared a list of 11 short targets in our latest quarterly update.

What does the smart money think about BrightSphere Investment Group plc (NYSE:BSIG)? 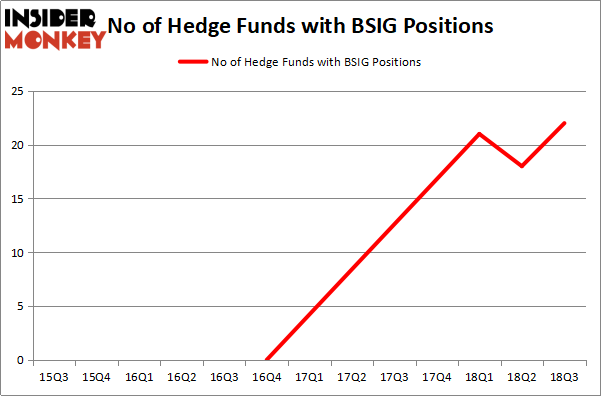 Of the funds tracked by Insider Monkey, Steve Cohen’s Point72 Asset Management has the number one position in BrightSphere Investment Group plc (NYSE:BSIG), worth close to $25.9 million, amounting to 0.1% of its total 13F portfolio. The second largest stake is held by Citadel Investment Group, managed by Ken Griffin, which holds a $20.6 million position; the fund has less than 0.1%% of its 13F portfolio invested in the stock. Other professional money managers that are bullish comprise Nathaniel August’s Mangrove Partners, John Brennan’s Sirios Capital Management and Israel Englander’s Millennium Management.

With a general bullishness amongst the heavyweights, specific money managers were breaking ground themselves. Paulson & Co, managed by John Paulson, created the largest position in BrightSphere Investment Group plc (NYSE:BSIG). Paulson & Co had $7.6 million invested in the company at the end of the quarter. Malcolm Fairbairn’s Ascend Capital also initiated a $1.5 million position during the quarter. The other funds with brand new BSIG positions are David Costen Haley’s HBK Investments and Gavin Saitowitz and Cisco J. del Valle’s Springbok Capital.

As you can see these stocks had an average of 13.75 hedge funds with bullish positions and the average amount invested in these stocks was $76 million. That figure was $141 million in BSIG’s case. Engility Holdings Inc (NYSE:EGL) is the most popular stock in this table. On the other hand Hecla Mining Company (NYSE:HL) is the least popular one with only 11 bullish hedge fund positions. Compared to these stocks BrightSphere Investment Group plc (NYSE:BSIG) is more popular among hedge funds. Considering that hedge funds are fond of this stock in relation to its market cap peers, it may be a good idea to analyze it in detail and potentially include it in your portfolio.