Bridgepoint Education Inc (BPI): Now Is the Time to Invest in Education

To say that higher education in America is hurting would be an understatement. Big brother-like investigations and regulations from the US Government, huge enrollment drops, increasing default rates, student loan debt exceeding $1 trillion, lawsuits abounding, undercuts in pricing from subsidized public colleges, competition from new learning technology called MOOCs, and a majority view that mixing profits with education is unethical have all combined to make the for-profit education industry arguably the most unloved industry of any group of publicly-traded companies.

They’re also arguably the cheapest. Bridgepoint Education Inc (NYSE:BPI), an almost exclusively online educator in the middle of accreditation and legal battles, sells for 6.7 times free cash flow and that’s not even including the companies $400 million cash hoard with no debt. Industry leader Apollo Group Inc (NASDAQ:APOL), whose University of Phoenix was recently placed on probation and has experienced unusually high enrollment drops, is on sale for 5 times free cash flow with $900 million cash and hardly any debt. ITT Educational Services, Inc. (NYSE:ESI), an urban campus-based technical educator, was bringing in over $500 million just a few years ago and now sells for that same amount. 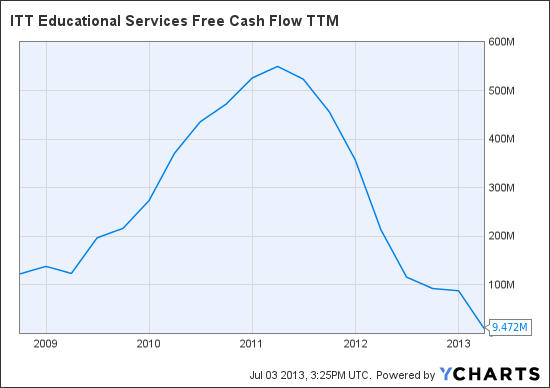 I’ve done extensive research on Bridgepoint and find the stock to be an ideal arbitrage play.  Play that cash.  The sooner the general market recognizes that cash, the soonor you’ll see price appreciation. In the past, Bridgepoint Education Inc (NYSE:BPI) has been an effective competitor in online education because of an industry-leading cost structure and tuition prices that minimized Title IV Aid dependence.  The company is now under pressure from accreditors to move corporate HQ out of California, closer to where Ashford University is located.  Though such a move would certainly take a bite out of the company’s cash hoard, it would likely solve the accreditation issue and further lower costs  with more synergy between corporate and Ashford.  It bothers me that management didn’t solve this issue already and make the move to prevent it from becoming a bigger issue, but I think Bridgepoint Education Inc (NYSE:BPI) is still a good buy.

At ITT Educational Services, Inc. (NYSE:ESI), FCF and enrollments have taken a huge hit, but new student starts, the metric used industry-wide to indicate how enrollments are trending, is very promising.  New student start YOY growth is almost in the black and total enrollment growth should follow suit soon after.  In the meantime, the company is drastically cutting costs and scaling everything down.  I think costs and revenues are both going in the right direction now, so its only a matter of time before the market recognizes the recovery.  Further, ITT has one of the strongest brands in the industry, especially for its size, giving it a sustainable advantage.

Apollo Group Inc (NASDAQ:APOL) concerns me the most of the three because enrollments are trending the worst, the valuation isn’t as great, and University of Phoenix is on probation.  It seems to me that accreditors are trying to make an example of Apollo since it is the industry leader.  I do like the initiatives to close all those campuses though.  Apollo has one of the most expansive cost-cutting plans.  Probation is dangerous, but the company has a good deal of time to fix the issues before accreditation is actually lost.

None of these companies have to make the money they used to in the future to make them good buys now.  Even if they can recover FCF to half their previous peaks, very reasonable for many, shareholders will be rewarded tremendously.

If you think as I do, that these companies present compelling value, act now.  Most people take the following stance when considering whether to invest in for-profits now: “I’m going to let the dust settle and all the uncertainty clear up before I go long. It’s just too risky now.” I was enlightened recently reading The Most Important Thing by Howard Marks. He says the following which is very relevant to this situation:

Certain common threads run through the best investments I’ve witnessed. They’re usually contrarian, challenging and uncomfortable – although the experienced contrarian takes comfort from his or her position outside the herd. Whenever the debt market collapses, for example, most people say, ‘We’re not going to try to catch a falling knife; it’s too dangerous.’ They usually add, ‘We’re going to wait until the dust settles and the uncertainty is resolved.’ What they mean, of course, is that they’re frightened and unsure of what to do. The one thing I’m sure of is that by the time the knife has stopped falling, the dust has settled and the uncertainty has been resolved, there’ll be no great bargains left. When buying something has become comfortable again, it’s price will no longer be so low that it’s a great bargain. Thus a hugely profitable investment that doesn’t begin with discomfort is usually an oxymoron.