Oil is a tricky thing. On the surface, it seems so simple. It’s a single commodity that’s extracted, refined, and sold. Much to the chagrin of Adam Smith, though, the price of oil rarely is based on simple supply and demand. It’s one of the most complex commodities in the world because of the economic and political implications it carries. To quote Daniel Yergin, author of The Prize and one of the foremost authorities on energy security:

“The major obstacle to the development of new supplies is not geology but what happens above ground: international affairs, politics, investment and technology.”

Let’s look at three factors that can have a profound effect on the price of a barrel of oil.

1. Economic growth. You could argue for days on whether oil prices determine economic growth or if economic growth has dictated oil prices. So let’s settle on the fact that they both go hand-in-hand. Since 1975, almost every U.S. recession has been accompanied with a pullback in oil prices. It should come as so surprise, then, that oil and the S&P 500 (INDEXSP:.INX) 0000have moved in tandem as well. 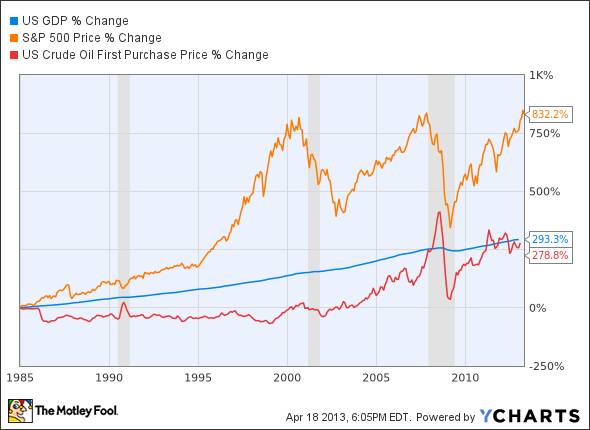 This applies to almost everywhere around the globe. In the past couple of months, the price of Brent crude, the benchmark for global oil trading, has dropped 18% in large part because of weak U.S. and Chinese GDP figures. Perhaps to be more general, economic growth is dependent on the price of energy; it just happens to be that oil is the predominant energy source around the world, supplying more than one-third of the world’s energy demand. So unless some other source of energy captures the top spot from oil, then oil will remain the bellwether for energy prices around the world.

2. Geopolitical risk. Oil is a very delicate commodity, and any potential disruption of supply could lead to large changes in prices. During the Libyan revolution, TOTAL S.A. (ADR) (NYSE:TOT), BP plc (ADR) (NYSE:BP) , and several other oil companies halted operations, and a country that was once repsonsible for 1.6 million barrels per day came to an almost screeching halt. From January to May 2011, as Libyan oil prosecution had tumbled 88%, Brent crude jumped almost 30% even though Libya supplied only 0.5% of total global exports.

The same can be applied to the value of companies as well. Apache Corporation (NYSE:APA) has about 20% of its production in Egypt, and in its recent annual report it highlighted the Arab Spring and the Egyptian election as major risks that could drastically affect production numbers for the company. Whenever companies invest heavily in regions of the world with political uncertainty, they’re taking a much larger risk that can affect their operations and market value.

3. OPEC production decisions. If you were to ask an average person on the street to name the world’s largest oil company, the first response you get would almost undoubtedly be Exxon Mobil Corporation (NYSE:XOM) Mobil . But that’s not even close. Exxon Mobil Corporation (NYSE:XOM) lags behind the large nationalized oil companies that are part of the Organisation of Petroleum Exporting Countries, more commonly known as OPEC. While the U.S. may have the world’s third largest petroleum reserves, they’re divided up among several hundred companies, and very rarely is there excess supply. That’s not the case with OPEC members. These countries, most notably Saudi Arabia, have excess production capacity and will set production targets that more or less dictate the price of crude around the world.

While normally this will bring a certain stability to the price of oil, it can also lead to dangerous consequences. Take, for example, the big run-up in oil prices leading to the financial collapse in 2007-2008. At that time, excess production capacity for OPEC nations was much lower than normal, and they were less able to control prices.