Boston Beer Co Inc (SAM): Is It Destined for Greatness?

Investors love stocks that consistently beat the Street without getting ahead of their fundamentals and risking a meltdown. The best stocks offer sustainable market-beating gains, with robust and improving financial metrics that support strong price growth. Does Boston Beer Co Inc (NYSE:SAM) fit the bill? Let’s take a look at what its recent results tell us about its potential for future gains.

The graphs you’re about to see tell Boston Beer Co Inc (NYSE:SAM)’s story, and we’ll be grading the quality of that story in several ways: 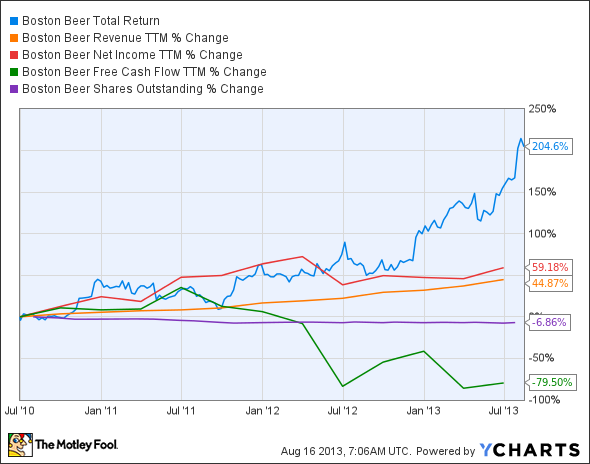 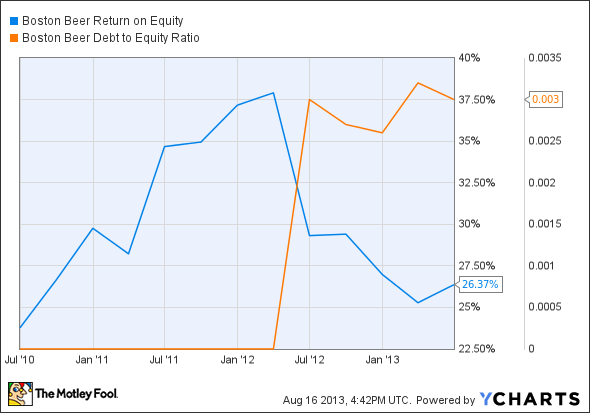 Boston Beer Co Inc (NYSE:SAM) puts together passable performance, earning four out of seven passing grades. Two key areas of concern are the divergence between free cash flow and net income, and the discrepancy between share price growth and earnings growth. Boston Beer could easily pay down its minuscule debt and gain another passing grade next time, so let’s dig a little deeper to find out what Boston Beer is currently doing to improve its other fundamentals.

According to the Beer Institute, the U.S. hard cider market was estimated at 690,000 barrels in 2012; but that small slice of the beer market has been posting incredible growth rates — it was up about 88% year over year in the first quarter of 2013. However, as hard cider makes up less than 1% of the entire beer market, it still has lots of room to grow. Fool contributor Rich Duprey notes that Boston Beer’s Angry Orchard cider brand has claimed the top of the market since its launch last year, surpassing C&C Group‘s Vermont Hard Cider brand, the previous market leader.

However, Boston Beer Co Inc (NYSE:SAM)’s hardly alone in seeking to tap this exciting new growth segment. The global cider market is growing by roughly 10% every year, and Anheuser-Busch InBev and Heineken have rolled out three new cider brands: Stella Artois Cidre and Michelob Ultra Light Cider for the former, and Strongbow for the latter. Miller Coors, the joint venture of SABMiller and Molson Coors, recently acquired Crispin Cider to extend its reach without building a brand from the ground up. Beam also introduced a hard cider version of its Skinnygirl brand, which exploits the brand’s strong female ties. Boston Beer might face major headwinds as more ciders seep into the market.