Most investors tend to think that hedge funds and other asset managers are worthless, as they cannot beat even simple index fund portfolios. In fact, most people expect hedge funds to compete with and outperform the bull market that we have witnessed over the past few years. However, hedge funds are generally partially hedged and aim at delivering attractive risk-adjusted returns rather than following the ups and downs of equity markets hoping that they will outperform the broader market. Our research shows that hedge funds do have great stock picking skills, so let’s take a glance at the smart money sentiment towards Blackstone Mortgage Trust Inc (NYSE:BXMT).

Blackstone Mortgage Trust Inc (NYSE:BXMT) was in 14 hedge funds’ portfolios at the end of September. BXMT shareholders have witnessed an increase in hedge fund sentiment recently. There were 10 hedge funds in our database with BXMT holdings at the end of the previous quarter. Our calculations also showed that bxmt isn’t among the 30 most popular stocks among hedge funds.

According to most stock holders, hedge funds are perceived as underperforming, outdated financial tools of the past. While there are over 8,000 funds trading today, Our researchers choose to focus on the moguls of this group, about 700 funds. Most estimates calculate that this group of people administer the majority of the hedge fund industry’s total asset base, and by keeping track of their matchless investments, Insider Monkey has uncovered numerous investment strategies that have historically outrun Mr. Market. Insider Monkey’s flagship hedge fund strategy outpaced the S&P 500 index by 6 percentage points a year since its inception in May 2014 through early November 2018. We were able to generate large returns even by identifying short candidates. Our portfolio of short stocks lost 24% since February 2017 (through December 3rd) even though the market was up nearly 23% during the same period. We just shared a list of 11 short targets in our latest quarterly update.

How have hedgies been trading Blackstone Mortgage Trust Inc (NYSE:BXMT)?

Heading into the fourth quarter of 2018, a total of 14 of the hedge funds tracked by Insider Monkey were long this stock, a change of 40% from one quarter earlier. The graph below displays the number of hedge funds with bullish position in BXMT over the last 13 quarters. With the smart money’s sentiment swirling, there exists a few key hedge fund managers who were adding to their stakes meaningfully (or already accumulated large positions). 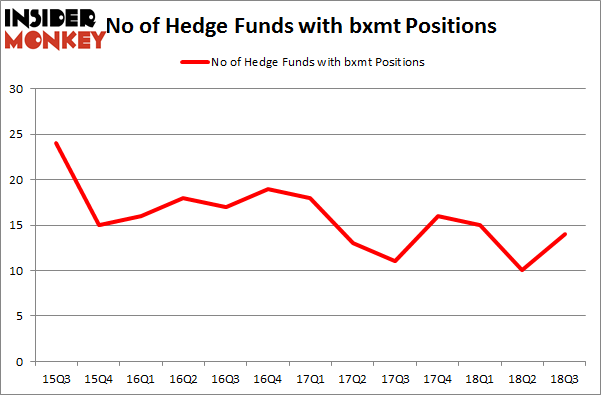 Of the funds tracked by Insider Monkey, John Armitage’s Egerton Capital Limited has the most valuable position in Blackstone Mortgage Trust Inc (NYSE:BXMT), worth close to $43.7 million, comprising 0.3% of its total 13F portfolio. The second largest stake is held by Charles Clough of Clough Capital Partners, with a $32.1 million position; 3% of its 13F portfolio is allocated to the stock. Some other members of the smart money with similar optimism contain Jim Simons’s Renaissance Technologies, Dmitry Balyasny’s Balyasny Asset Management and James H. Litinsky’s JHL Capital Group.

As one would reasonably expect, key hedge funds were leading the bulls’ herd. Citadel Investment Group, managed by Ken Griffin, established the largest position in Blackstone Mortgage Trust Inc (NYSE:BXMT). Citadel Investment Group had $8.2 million invested in the company at the end of the quarter. Brad Dunkley and Blair Levinsky’s Waratah Capital Advisors also made a $1.5 million investment in the stock during the quarter. The other funds with new positions in the stock are Matthew Hulsizer’s PEAK6 Capital Management, Michael Platt and William Reeves’s BlueCrest Capital Mgmt., and Roger Ibbotson’s Zebra Capital Management.

As you can see these stocks had an average of 15.75 hedge funds with bullish positions and the average amount invested in these stocks was $303 million. That figure was $155 million in BXMT’s case. TriNet Group Inc (NYSE:TNET) is the most popular stock in this table. On the other hand Ardagh Group S.A. (NYSE:ARD) is the least popular one with only 8 bullish hedge fund positions. Blackstone Mortgage Trust Inc (NYSE:BXMT) is not the least popular stock in this group but hedge fund interest is still below average. This is a slightly negative signal and we’d rather spend our time researching stocks that hedge funds are piling on. In this regard TNET might be a better candidate to consider a long position.