Fairfax Financial is a holding company founded by Prem Watsa, often called the Warren Buffett of Canada. At the end of June, Fairfax Financial’s public equity portfolio was worth $1.53 billion, which fell to $1.11 billion as of the end of September. The decline doesn’t appear to be due to performance however, at least not on the long side of the firm’s portfolio. Fairfax’s 21 long positions in stocks that were valued at $1 billion or more on June 30 had weighted average returns of 13.87% in the third quarter.

Keep in mind though, that our calculations of the fund’s returns can be different from its actual returns, because we don’t include positions in micro-cap stocks, short positions, or some other instruments. Nonetheless, our measurement can still be used for assessing the fund’s investment expertise when it comes to bullish bets on larger companies. With that said, in this article we’ll take a closer look at four of Fairfax Financial’s holdings on June 30, which include BlackBerry Ltd (NASDAQ:BBRY), International Business Machines Corp. (NYSE:IBM), Kennedy-Wilson Holdings Inc (NYSE:KW), and Resolute Forest Products Inc (NYSE:RFP).

For starters, we have BlackBerry Ltd (NASDAQ:BBRY), a company mostly known for its famous BlackBerry brand of smartphones. The firm made no change to its position in the company during the second quarter, continuing to hold 46.72 million shares of the stock, which were valued at $313.15 million at the end of June. This position comprised 20.50% of its equity portfolio’s value, and the stock delivered a return of 18.9% during the third quarter, though it remains down by over 23% this year. BlackBerry recently got in a dust-up with Apple after a Bloomberg article claimed that the latter was pilfering key employees from the former. BlackBerry disputed the article in a blog post, pointing out numerous factual errors, including the positions of some of the employees who left for Apple.

At Q2’s end, a total of 20 of the hedge funds tracked by Insider Monkey held long positions in BlackBerry, a 17% dip from the first quarter of 2016. One of the largest shareholders of BlackBerry Ltd (NASDAQ:BBRY) was Renaissance Technologies, which amassed a stake valued at $107.1 million. Kahn Brothers, D E Shaw, and Wynnefield Capital also held valuable positions in the company. 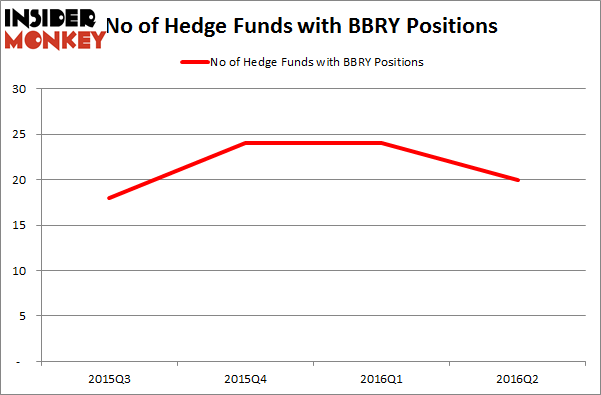 The second stock we are going to analyze is one of the world’s most famous tech companies, International Business Machines Corp. (NYSE:IBM). Fairfax Financial Holding also kept its position in this company unchanged from the previous quarter, holding 1.36 million shares of it which were valued at $206.80 million on June 30. IBM’s stock returned 5.6% during the third quarter, and over the past 12 months has gained 17.24%.

We’ll check out two more of Fairfax’s stock picks on the next page.

This Fund Dumped Apple, Replaced It With Skechers USA, Lantheus Holdings, and...
Monthly Newsletter Strategy
Download a free copy of our newsletter and see the details inside!
Hedge Fund Resource Center
Related News
Five Stocks Traders Are Watching Today: Brocade Communications, Valeant, BlackBerry, and More BlackBerry Disputes Pro-Apple Bloomberg Article, Einhorn Takes Another Shot at Tesla, Plus the Latest on MEMP Why Toyota, IBM, Teva, and Two Other Stocks Are in Spotlight Today Why IBM, EQT, Calithera Biosciences, Amazon, and Facebook Are Trending Blackberry (BBRY)’s Swan Song, Bear Attacks and Failed Drugs: 5 Stocks Getting Mauled by the Market Today IBM, United Continental, Del Taco, and More: Here’s How These Companies Performed During Their Latest Quarters BlackBerry Ltd (BBRY) Takes Down DTEK60 Preorder Page How to Move To Canada with No Money: Requirements for US Citizens 15 Best Careers if You are Bad at Math 10 Easiest Female Celebrities to Impersonate
Billionaire Hedge Funds