Bitcoin’s stubborn refusal to capitulate under the $10k level appears to align with the determination by market whales to hold on to their coins for the long-term.

An increased rate of Bitcoin accumulation was witnessed on the institutional level all throughout the summer of 2020. In particular, the world’s largest digital currency investment firm, Greyscale, was regularly seen to make purchases of Bitcoin and Ethereum in amounts which exceeded the coin’s mining issuance rate.

While Greyscale grabbed most of the news headlines, the truth is a large volume of whales have been quietly adding to their Bitcoin stockpiles. According to blockchain analysts at Glassnode, the richest Bitcoin addresses have been continuing to accumulate for the majority of 2020. The last instance of major panic selling came in March, during the major market crash which came to be known as “Black Thursday”.

The number of Bitcoin holders who own more than a million dollars worth of BTC is estimated to be around 17,600. The ten richest addresses account for just under 5% of the entire Bitcoin supply, while the top 100 addresses house over 14%. More than a third of the total supply is found distributed across just 1,000 addresses.

Independent analysis by popular market researcher Willy Woo points to a consolidation of by coin holders as evidence that Bitcoin is expected to continue its upwards momentum – in the short term at least.

The graph below shows the movement of the BTC price aligned with changing of hands among major Bitcoin addresses. 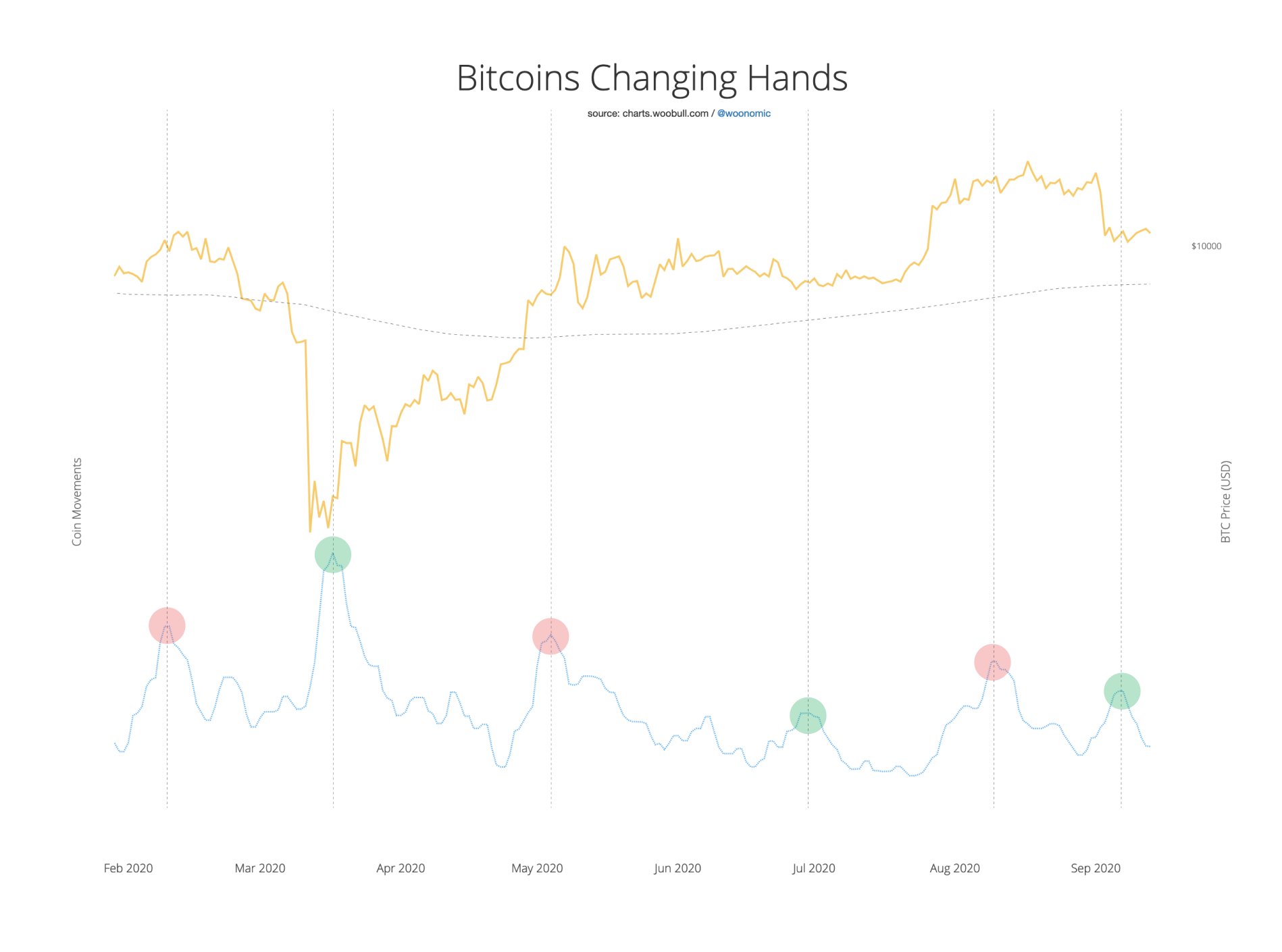 Woo’s examination of these macro trends leads the analyst to surmise that another catastrophic crash is unlikely. He wrote:

“Another impulse of coins changing hands has completed, the next directional move over the coming weeks is likely upwards. It’s very unlikely we’ll see any kind of a catastrophic dump in price from here.”

The analyst does think a short-term flash dip is still possible, but believes the amount of buy support under $10k means any such dip will be short-lived.

“I’m still cautious of another short term dump to fill the gap but so far it’s looking like it’s been front run for liquidity which is strongly bullish if we break resistance here. There’s a lot of bids in the spot orderbooks wanting to snap up the gap in the mid-high 9000s.”

The optimistic outlook that Bitcoin may now have found a new baseline between $9-10k seems credible. BTC has already spent more time above this level than at any other time in its history. Woo sees this as a viable entry point for new investors.

“Not a bad time to get in if you’re a spot investor, given the longer range macro. There’s plenty of buy support below 10k, this is a buy the dip scenario.”