Published on November 4, 2016 at 2:43 am by Insider Monkey Staff in Hedge Fund Analysis, Hedge Funds, News

The majority of hedge funds and other top money managers tend to have a long-term focus when they make investments. This means that retail investors can safely mimic the moves of these top investors, knowing that they haven’t missed the boat and missed out on the stock’s expected future gains. That’s why each quarter, we provide the latest ownership figures and trends among top investors, so that retail investors can judge which stocks may be primed for big future returns.

In this article we’ll take a look at the performance of Alex Denner‘s Sarissa Capital Management, one of many healthcare-focused hedge funds in our system which delivered monster returns in the third quarter according to our calculations. In Sarissa Capital’s case, it held seven long positions in stocks with a market cap of $1 billion as of June 30, with those stocks bestowing a weighted average return of 31.6% during the quarter. That pushed Sarissa’s returns using that methodology to over 39% over the past year, despite the healthcare industry underperforming the broader market during that time.

Do note that the actual returns of the fund could be quite different than our calculations, as they only include the fund’s long positions as reported in its quarterly 13F filings, and not any other positions or investments which the fund might hold. A fund’s long portfolio could also have undergone changes during the quarter, while our returns are based on the positions as held on June 30.

Now then, let’s have a look at four of Sarissa Capital’s favorite stocks and see how they performed in the third quarter and since.

Biogen Idec Inc. (NASDAQ:BIIB) is one of the more popular healthcare stocks among the investors in our database, which includes many healthcare-focused hedge funds, and it’s only grown in popularity of late, as witnessed by the graph below. It was held by 73 of the hedge funds tracked by Insider Monkey on June 30, a 14% increase from a quarter earlier. Viking Global, managed by Andreas Halvorsen, held the number one position in Biogen Idec Inc. (NASDAQ:BIIB) ($776.4 million position), while the second-most bullish fund manager was D E Shaw ($390.7 million position). Samuel Isaly’s OrbiMed Advisors, Ken Griffin’s Citadel Investment Group, and Israel Englander’s Millennium Management were some other shareholders of the stock.

Sarissa Capital’s position stood at 310,000 shares valued at $74.96 million on June 30, its second-most valuable position. Biogen Idec Inc. (NASDAQ:BIIB) shares surged by nearly 30% during the third quarter, pushing its market cap north of $65 billion. Shares surged partially on the rumors that Biogen could be acquired by either Merck & Co., Inc. (NYSE:MRK) or Allergan PLC (NYSE:AGN), though those rumors have since died down. 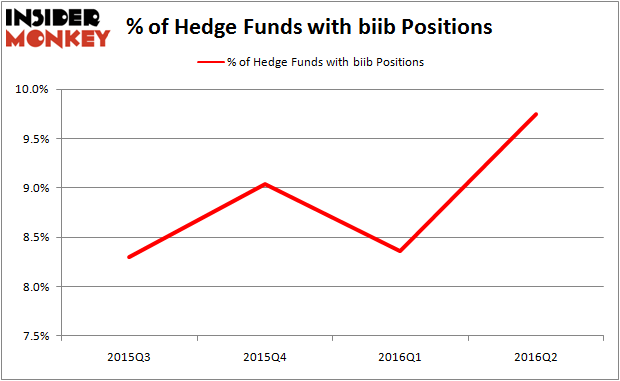 The Medicines Company (NASDAQ:MDCO) was Sarissa Capital’s third-most valuable holding on June 30, standing at 1.75 million shares worth $58.92 million. Shares gained about 12% during the third quarter but have slumped heavily since, giving back all of those gains and more. Shares have trended down steadily since October 26, despite its third-quarter adjusted EPS loss of $0.62 being less than half the adjusted loss that the market expected.

25 other hedge funds tracked by Insider Monkey held long positions in The Medicines Company (NASDAQ:MDCO) on June 30, up by one quarter-over-quarter. Keith Meister’s Corvex Capital had the most valuable position in the stock among them ($103.8 million position), while the second-largest stake was held by Partner Fund Management, led by Christopher James ($88.1 million position). Some other members of the smart money with similar optimism in The Medicines Company (NASDAQ:MDCO) comprised Roberto Mignone’s Bridger Management and Stephen DuBois’ Camber Capital Management

We’ll check out two more stocks that Sarissa Capital likes on the next page.