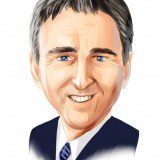 Ken Griffin has worked himself up from trading options in his college dorm room to managing one of the largest hedge funds in the world. The financial crisis was a huge setback for Citadel, but Griffin and his team successfully recovered their losses and pulled the fund above its high water mark. The most complete picture of Citadel’s holdings comes in the form of 13F filings, which are released about midway through each quarter and detail many of its positions from the end of the last quarter. We’d note that Citadel often makes big moves, and so we’re not sure that any of the positions that we see on the 13F represent what the fund actually owns right now. However, based on the information we have and on previous filings here’s what Griffin seems to have been doing:

Changing personal products companies. Citadel’s new favorite stock, according to the 13F, was The Procter & Gamble Company (NYSE:PG) with the fund increasing the number of shares in its portfolio by over 300% to 6.5 million. Interestingly, over the same period it sold almost all of what had been a 3.3 million-share position in Kimberly Clark Corp (NYSE:KMB). These are both personal products companies: Kleenex and Huggies for Kimberly Clark, Gillette and Pantene for Procter & Gamble (along with many other consumer brands, in both cases). Procter & Gamble, which is five to six times Kimberly Clark’s size in terms of market cap, trades at slight premiums when looking at either the trailing or forward P/E multiple. Its earnings have also been down, while Kimberly Clark’s have been up. We’re not sure that he made the right call here, as Kimberly Clark appears to be a marginally better value.

Selling Pepsi. PepsiCo, Inc. (NYSE:PEP) had been one of Griffin’s largest holdings last quarter, but Citadel cut its stake from 4 million shares to about 60,000. Pepsi- along with its competitor Coca-Cola- is generally considered to be a safe, stable investment with a fairly low beta and a dividend yield above 3% at current prices. As a value stock, though, it doesn’t look that good: Pepsi’s trailing P/E multiple is 18 even though in the third quarter its earnings were down 5% from the same period in 2011. We’d be looking for at least modest growth rates at a P/E that high. Read our analysis of Pepsico compared to its peers.

Capital One. Citadel had a small position in Capital One Financial Corp. (NYSE:COF) at the beginning of July, and increased its holdings during the third quarter to a total of nearly 5 million shares. This made it the third largest equity position in the fund’s 13F portfolio. Compared to other credit card companies, Capital One admittedly has a less attractive brand but is quite cheap at 8 times trailing earnings. Fellow billionaire Eddie Lampert’s ESL Investments sold shares of Capital One during the quarter (see more activity at ESL Investments) but we agree more with Griffin here.

Retail. The 13F shows Citadel initiating a position of 1.4 million shares in Simon Property Group, Inc. (NYSE:SPG), a $45 billion REIT that owns mall complexes and is thus seen as being highly sensitive to brick-and-mortar retail sales. Lower retail sales, or more customers moving online, reduces the demand for mall space and so both rates and capacity utilization can decline. Simon pays a dividend yield of about 3% at current prices (earnings analysis is not as meaningful for REITs). We’re skeptical of this move. The fund also added to its position in Michael Kors, an upscale apparel retailer which is dependent on growth (and, likely, better economic numbers as well as increased market penetration). That company’s trailing and forward P/E multiples are 40 and 25, respectively, but it more than doubled earnings in its most recent quarter compared to the same period in the previous year. We’d avoid that stock as well- the multiples are more high than we’re comfortable with, though the rapid growth rate keeps us away from short selling.

We think that Capital One is cheap and that Pepsi is at about the right price, but we’d advise against following the rest of Citadel’s moves from last quarter. There are almost certainly cheaper and more reliable ways to play retail than Griffin’s picks, and selling out of Kimberly Clark to buy more Procter & Gamble doesn’t seem like a good trade to us.