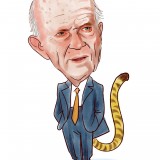 Legendary investor Julian Robertson of Tiger Management retired some time ago, but his enormous success running the fund- not to mention his ability to produce several successful “Tiger Cub” managers to carry on his legacy- makes him a good investor to follow. We have already processed Robertson’s 13F filing for the third quarter, a document which discloses many of his long equity positions as of the end of September (see our list of Robertson’s holdings and read our analysis of his activity during the quarter). One of the reasons why it’s good to follow top investors like Robertson is because they not only invest in big names but also have positions in smaller, often lesser-known companies and so can essentially serve as a screen of this broader universe of stocks. Here are Robertson’s five largest holdings with market capitalizations between $2 billion and $10 billion:

Robertson increased his stake in Ocwen Financial Corporation (NYSE:OCN) by 68% to a total of about 760,000 shares. The mortgage loan servicing company’s stock price has more than doubled in the last year, and it’s interesting to see Robertson adding shares. Revenue in the third quarter was almost twice what it was in the third quarter of 2011, and earnings grew about 150%. At 37 times trailing earnings- but only 8 times forward earnings estimates- Wall Street analysts expect very high growth next year as well. We’d be a little hesitant to depend that much on continued growth.

A position of about 250,000 shares was initiated in Charter Communications, Inc. (NASDAQ:CHTR), a cable, Internet, and phone provider. Charter is expected to report a loss for the current fiscal year, but then turn profitable in 2013 (though the implied forward earnings multiple is greater than 100). Revenue growth has been very limited. As a result we think that we’d pass when it comes to this recommendation.

Verisign, Inc. (NASDAQ:VRSN) was another of Robertson’s favorite mid-cap stocks with a position of about 320,000 shares. Verisign is best known for providing Internet registry services for .com domain names. It carries a trailing P/E multiple of 25, which seems high, but at least has been delivering strong growth with net income up 32% last quarter from its level a year ago. Billionaire- and Tiger Cub- Stephen Mandel initiated a position of 9.4 million shares during the second quarter (find more of Stephen Mandel’s stock picks). It could be a “growth at a reasonable price” stock, but we’d have to see strong evidence that it can continue growing the bottom line.

Robertson kept his holdings of Cablevision Systems Corporation (NYSE:CVC), which is primarily another cable/Internet/phone company but also owns several media properties, constant at about 550,000 shares. Cablevision is highly levered, and as at Charter the company has not seen much revenue growth. Its trailing P/E is 21, and so to be considered a good value it would need to see at least moderate earnings growth over the next several years. We wouldn’t buy it on a value basis, though we’d note the dividend yield is above 4% for any interested income investors.

Tripadvisor Inc (NASDAQ:TRIP) was another new stock in Robertson’s portfolio- his Tiger Cubs, we’ve noted, have been bullish on travel related websites for some time. The most recent data shows that 17% of Tripadvisor’s outstanding shares are held short, so the billionaire is going against a number of traders here. The travel reviews site reported earnings growth of 9% last quarter versus a year earlier, as revenue was up by about twice as much but margins fell. Its earnings multiples are high- in the 20s- so it’s not a screaming buy. In fact, we think that it would probably be better to own the bigger players in the industry (such as Priceline).

Apple Inc (AAPL), Google Inc (GOOG): Is the Smart Money Getting Out Now?