Billionaire John Paulson Says ‘No’ To MetroPCS Communications Inc (PCS) Deal, Should You?

MetroPCS is Paulson’s 14th largest public equity holding as of the end of 4Q, with him owning some 31.8 million shares. Paulson first took a new position during the third quarter, and then upped his stake by 34% during the fourth quarter (see Paulson’s entire portfolio). It appears that many MetroPCS Communications Inc (NYSE:PCS) investors have similar feelings as Paulson, as the stock has been pushed down over 20% since the deal’s announcement. 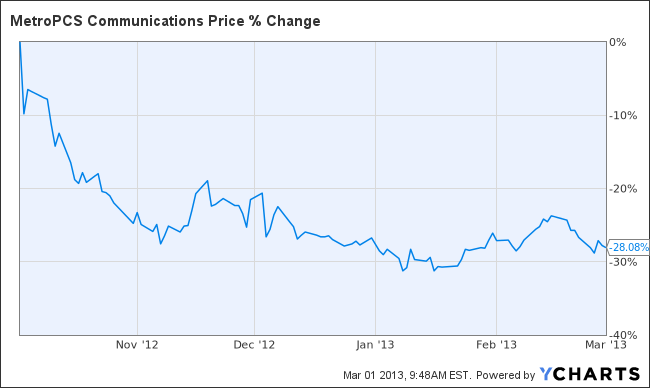 The MetroPCS / T-Mobile merger calls for Deutsche to take a 74% stake in the new company, with MetroPCS getting 26%. The benefits for the deal includes gaining access to T-Mobile’s advanced B2B services and Mobile virtual network operator (MVNO) platform, while T-Mobile could utilize MetroPCS Communications Inc (NYSE:PCS)’ superior market position in its no-contract wireless services (read more about the MetroPCS shareholder upheaval).

Although the merger with T-Mobile would boost MetroPCS’ presence in the 4G space, as well as its spectrum capacity, the deal valuation and debt concerns make the deal unattractive to Paulson and others. Paulson has voiced support for P. Schoenfeld Asset Management’s view that the current deal undervalues MetroPCS’ contribution significantly. His analysis shows that MetroPCS should indeed get upwards of 41.7% of the new company, as opposed to the 26% the current deal affords the company:

Other companies have even come into play as possible acquirers of MetroPCS. Prior to the Detushe announcement, Sprint had considered buying the company for $13.39 per share, and Dish Network had offered $11 per share.

AT&T Inc. (NYSE:T) and Verizon Communications Inc. (NYSE:VZ) have been clamoring for the top U.S. mobile market share for the last couple of years (see who’s the best bet). Although both AT&T and Verizon trade at comparable multiple premiums, they are leaders in the market. Prior to this, a deal for AT&T to acquire T-Mobile fell apart due to antitrust concerns. Meanwhile, Sprint is looking to become more competitive by taking a sizable investment from Softbank, which has afforded the company with the means to snatch up the illustrious Clearwire. However, I still like MetroPCS’ presence in emerging markets and the prepaid market, compared to AT&T and Verizon. MetroPCS is a leader in prepaid wireless broadband services; Verizon has less than has less than 2% of the prepaid market share, while AT&T has around 2.5% and Sprint 5%. MertroPCS, on the other hand, has managed to penetrate almost 9% of the prepaid market. The emerging market of prepaid services is expected to account for nearly one-fourth of the wireless market share by 2018.