Like everyone else, elite investors make mistakes. Some of their top consensus picks, such as Amazon, Facebook and Alibaba, have not done well in October due to various reasons. Nevertheless, the data show elite investors’ consensus picks have done well on average over the long-term. The top 25 S&P 500 stocks among hedge funds at the end of June 2018 lost an average of 8.8% through October 26th whereas the average stock in the S&P 500 Index lost 9.5% during the same period. Because their consensus picks have done well, we pay attention to what elite funds think before doing extensive research on a stock. In this article, we take a closer look at Starbucks Corporation (NASDAQ:SBUX) from the perspective of those elite funds.

Starbucks Corporation (NASDAQ:SBUX) ownership among the select group of funds tracked by Insider Monkey fell during Q3, hitting a 2-year low. The data did not include the large position opened by Bill Ackman’s Pershing Square in early-October, which came after the latest 13F filing period’s reporting date of September 30. Ackman believes Starbucks has a nearly unassailable position in the market: 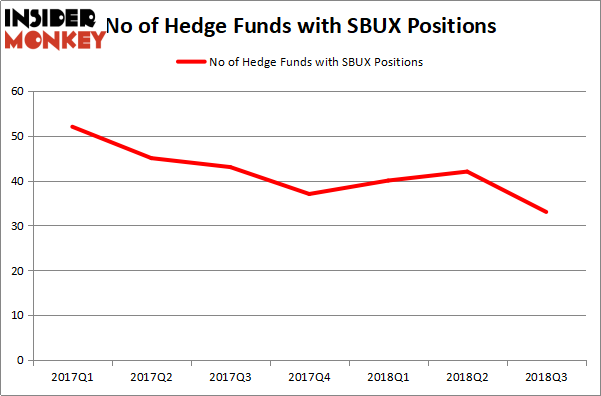 Among these funds, Cedar Rock Capital held the most valuable stake in Starbucks Corporation (NASDAQ:SBUX), which was worth $570.2 million at the end of the second quarter. On the second spot was Balyasny Asset Management which amassed $196.8 million worth of shares. Moreover, Citadel Investment Group, Adage Capital Management, and AQR Capital Management were also bullish on Starbucks Corporation (NASDAQ:SBUX), allocating a large percentage of their portfolios to this stock.

Since Starbucks Corporation (NASDAQ:SBUX) has witnessed falling interest from the aggregate hedge fund industry, logic holds that there is a sect of funds that slashed their entire stakes last quarter. Interestingly, Peter Rathjens, Bruce Clarke and John Campbell’s Arrowstreet Capital dropped the largest stake of the 700 funds monitored by Insider Monkey, valued at about $66.6 million in stock, and James Parsons’ Junto Capital Management was right behind this move, as the fund dropped about $33.3 million worth. These transactions are important to note, as total hedge fund interest dropped by 9 funds last quarter.

As you can see these stocks had an average of 49 hedge funds with bullish positions and the average amount invested in these stocks was $3.27 billion. That figure was $935 million in SBUX’s case. Charter Communications, Inc. (NASDAQ:CHTR) is the most popular stock in this table. On the other hand EOG Resources Inc (NYSE:EOG) is the least popular one with only 37 bullish hedge fund positions. Compared to these stocks Starbucks Corporation (NASDAQ:SBUX) is even less popular than EOG. Considering that hedge funds aren’t fond of this stock in relation to other companies analyzed in this article, it may be a good idea to analyze it in detail and understand why the smart money isn’t behind this stock.