It’s no surprise that over the past 24 months, the U.S. energy sector underperformed the broader equity markets by quite a margin.

Not very impressive
To get an industry perspective, the exchange-traded fund Energy Select Sector SPDR, which tracks the U.S. oil, gas and consumable fuels, and energy equipment and services industries, underperformed the S&P 500 by more than 17 percentage points since June 2011. A combination of volatile crude oil prices, as well as a demand-supply mismatch for natural gas, contributed to this lackluster performance. 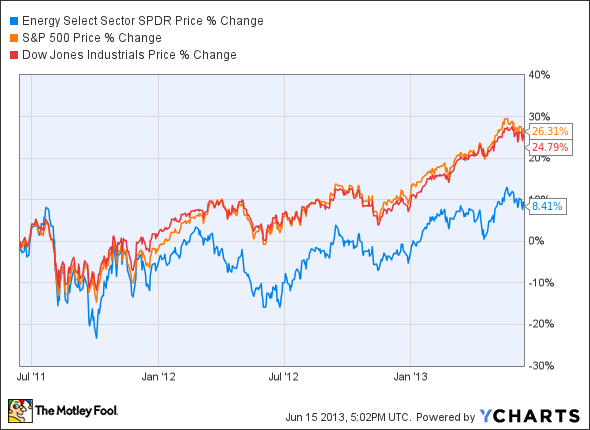 So where is this leading to? Will the U.S. energy sector continue to underperform? Or will we witness a breakthrough in this industry?

Unimpressive so far?
Apparently, the unconventional oil- and gas-producing regions haven’t been too impressive. Thanks to technological challenges coupled with high extraction costs, producers haven’t really been able to add value or see a decent return on investment thus far. Additionally, natural gas prices remained depressed — even below extraction costs for some producers — over the past two years. Simply put, the general pessimism regarding the overall energy sector seems to be hanging heavy in the markets.

However, that is also where discerning investors see opportunity. Unfortunately, this also comes with a rider: We are looking at a long-term perspective here.

It’s bigger than it looks like
The shale revolution is actually bigger than what most people have realized. What many have failed to understand is that energy investments are really long-term in nature. Most of these investments span decades. When it comes to shale oil and gas properties, we are still in the initial stages of development. Michael Yeager, who heads the petroleum division of BHP Billiton Limited (ADR) (NYSE:BHP), aptly sums it up: “Every time we look at the opportunities in our shale oil and gas plays, they get larger.”

For the record, BHP Billiton holds the second largest position in the Eagle Ford shale play behind leader EOG Resources Inc (NYSE:EOG). Along with ConocoPhillips (NYSE:COP), these three companies hold acreage in the Eagle Ford whose combined worth is an astounding $30 billion.

What’s evident is that even while taking a single unconventional resource play (in this case the Eagle Ford) into perspective, eventual development will take years. According to the Energy Information Administration’s latest report (link opens a PDF), the Eagle Ford is estimated to be hold a staggering 13.6 billion barrels of risked, technically recoverable shale oil in remaining reserves and undeveloped resources. Obviously, this also includes unproved reserves. This year alone, capital expenditures are estimated to hit $28 billion in the Eagle Ford, according to energy consulting firm Wood Mackenzie.