Published on October 24, 2010 at 9:49 am by Meena Krishnamsetty in Hedge Fund Analysis 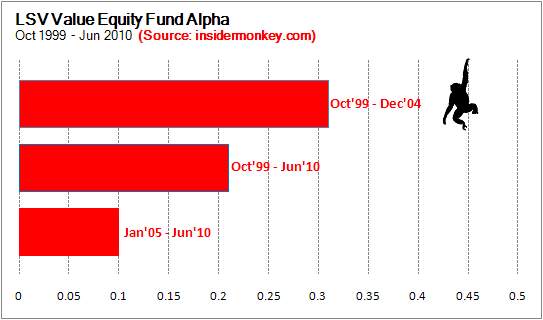 LSV Asset Management is a quantitative value equity manager founded by three academicians: Josef Lakonishok, Andrei Schleifer, and Robert Vishny. These are all well known behavioral finance researchers. Josef Lakonishok leads the firm now, as Andrei Schleifer and Rob Vishny are both retired. LSV believes that investors have judgmental biases and behavioral weaknesses, such as the tendency to extrapolate the past too far into the future, to think a good company is always a good investment, or to ignore statistical evidence. The firm believes these biases and weaknesses influence the many decisions insiders make, and that they can be exploited to achieve superior long term returns.

A proprietary investment model is used to rank a universe of stocks based on a variety of factors we believe to be predictive of future stock returns. The process is continuously refined and enhanced by our investment team although the basic philosophy has never changed – a combination of value and momentum factors. We then overlay strict risk controls that limit the over- or under-exposure of the portfolio to industry and sector concentrations. We also limit exposures in individual securities to ensure the portfolios are broadly diversified, further controlling risk.

The competitive strength of this strategy is that it avoids introducing the process to any judgmental biases and behavioral weaknesses that often influence investment decisions.

Portfolio turnover is approximately 30% for each strategy.

Insider Monkey, your source for free insider trading data, downloaded LSV Value Equity Fund’s returns from Yahoo to calculate their alpha by using Carhart’s four factor model. The LSV Value Equity Fund has $1.7 Billion under management, but the strategy is actually used to manage $22.2 billion in assets in various LSV funds. The fund’s objective is to achieve 200 basis points in excess returns before expenses. Considering that the LSV Value Equity Fund has an expense ratio of 0.65%, its alpha should not be less than 1.35%. The minimum investment is set at $100,000, so this fund is really not for small investors.

We calculated LSVEX’s alpha for the Oct 1999-Jun 2010 period. Though they call themselves a value fund, the LSV Value Equity Fund isn’t one. It had a slight value tilt in the first five years of the fund, but now it has a growth tilt. Neither of these are statistically significant though. Also during the first five years, the fund was investing in smaller companies. LSVEX had a monthly alpha of 31 basis points after expenses. This is exceptional for a mutual fund; usually mutual funds don’t have any alpha after expenses. But as assets grew, LSVEX was naturally tilted towards the large cap space. It doesn’t follow a momentum strategy.  Unfortunately, the LSV Value Equity Fund’s alpha dropped to 10 basis points as assets grew, between 2005 and Jun, 2010. This level of alpha is actually 15 basis points below their goal of 1.35% annual alpha.

The top holdings of LSV funds are Chevron (CVX), Pfizer (PFE), AT&T (T), Conoco Philips (COP), Bank of America (BAC), and JP Morgan (JPM). Notice a theme here? This is the fundamental problem with talented mutual fund managers- they siphon most of their alpha into their pockets by inflating assets under management, because it pays to have large AUM but it doesn’t pay to have a large alpha. LSV could opt to manage a $3 Billion hedge fund and maintain a respectable 10% alpha. Instead of doing this, LSV added another $20 Billion of assets that follow the index funds and got a 1% alpha. Then they charged a 0.65% management for managing a $20 Billion index fund.  That 0.65% fee from that $20 Billion is not much different from what could be collected from managing a hedge fund. LSV’s alpha is around $300-350 Million per year. They take $100-$150 Million from that in performance fees and leave the rest for their mutual fund investors.

And this is one of the best mutual funds out there. Of the mutual funds that do generate alpha, most don’t leave any alpha for their investors.

LSVEX seems like a better investment than Vanguard’s or Fidelity’s index funds. Go consult your financial advisor; he will probably tell you that both LSVEX and index funds suck, and you should invest your nest egg with the mutual fund that gives the highest commission to your advisor!!