Of all the retailers today, it seems that Best Buy Co., Inc. (NYSE:BBY) is having the greatest difficulty producing big sales each quarter. The problem with Best Buy is that it is facing stiff competition from online retailers. Best Buy seems to be stuck in the brick and mortar business. This is not good for the company, as online retailers have been stealing market share from physical stores.

Best Buy Co., Inc. (NYSE:BBY) has its own online website like other online retailers, but it doesn’t match up to the them at all. In fact, it is good that Best Buy realizes that stores are struggling while online retailers are surging. Best Buy has 1,300 stores nationwide, and it wants to be able to wall off parts of its stores. After creating new space at their stores, they want to be able to sublease them out to smaller retailers. 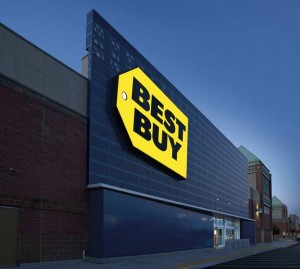 Despite Best Buy missing analyst earning estimates throughout most of 2012, the company had finally boosted its earnings slightly. Best Buy Reported a fourth-quarter loss of $409 million, or $1.21 per share. This compares better than the same quarter the previous year, where it had reported a loss of $1.82 billion, or $5.17 per share. The bad news is that the company still lost a significant amount of money, but the good news is that it didn’t lose as much as the previous year.

Revenue increased slightly to $16.71 billion from $16.67 billion the same period last year. I would say that Best Buy Co., Inc. (NYSE:BBY) still has a long way to go if they are to recover their business, and they need to change their strategy around to model themselves after online retailers. One of its problems is that Best Buy has an open showroom for displaying products, which was good back in the day. Right now customers take advantage of that by viewing the products at the stores, and then purchasing them online at a cheaper price from a competitor.

There are two major competitors that are giving Best Buy Co., Inc. (NYSE:BBY) some trouble. The first competition comes from another brick and mortar store, Wal-Mart Stores, Inc. (NYSE:WMT). The difference, though, is that Wal-Mart has cheaper prices and it also puts a lot of focus on its online store. Wal-Mart has done well for investors, as it is way off of its 52-week low of $57.18 per share, and is currently trading at around $77 per share.

Wal-Mart Stores, Inc. (NYSE:WMT) also has an excellent dividend yield of 2.43% for investors while. Wal-Mart didn’t quite do a home run on earnings so to say, but it did pretty well considering it has many stores. Wal-Mart Stores, Inc. (NYSE:WMT)’s earnings came in at $1.67 per share, way higher than consensus estimates of only $1.57 per share. Revenue came in at $127.1 billion, which was a little less than what analysts had expected. The good part is that Wal-Mart was able to turn in a profit, and not lose money like Best Buy did.

Another competitor that plagues Best Buy Co., Inc. (NYSE:BBY), and also fends off well against Wal-Mart is Amazon.com, Inc. (NASDAQ:AMZN). Amazon.com, Inc. (NASDAQ:AMZN) trades close to its 52-week high of $283 per share, but has a forward price to earnings ratio of 187. So why does Amazon’s stock trade so high compared to Wal-Mart Stores, Inc. (NYSE:WMT) and Best buy? The answer is pretty easy, it all comes down to online retailing.